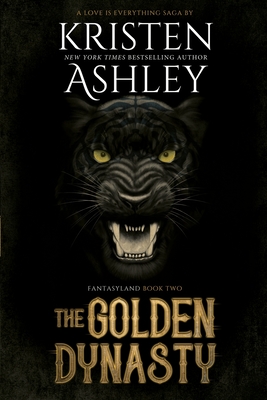 This is book number 2 in the Fantasyland series.

Circe Quinn, the office manager of her father's moving company, goes to sleep at home and wakes up in a corral filled with women wearing sacrificial virgin attire - and she's one of them. She figures (rightly) this is not good and soon finds out that she's not having a wild dream, she's living a frightening nightmare where she's been transported to a barren land populated by a primitive people. Then, in short order, she is installed very unwillingly on her white throne of horns as their Queen.Dax Lahn is the king of Suh Tunak, the Horde of the nation of Korwahk. With one look at Circe, he knows she will be his bride and together they will start the Golden Dynasty of legend.Circe and Lahn are separated by language, culture and the small fact she's from a parallel universe and has no idea how she got there or how to get home. But facing challenge after challenge, Circe finds her footing as Queen of the brutal Korwahk Horde and wife to its King. Then she makes friends. Then she finds herself falling in love with this primitive land, its people and especially their savage leader.

Kristen Ashley grew up in Indiana, but has lived in Colorado and the West Country of England. Thus she has been blessed to have friends and family around the globe. Her posse is loopy (to say the least), but loopy is good when you want to write. Kristen was raised in a house with a large and multi-generational family. They lived on a very small farm in a small town in the heartland and existed amongst the strains of Glenn Miller, The Everly Brothers, REO Speedwagon and Whitesnake (and the wardrobes that matched). Needless to say, growing up in a house full of music, clothes and love was a good way to grow up. And as she keeps growing up, it keeps getting better.