Behind the Badge in River City: A Portland Police Memoir (Paperback) 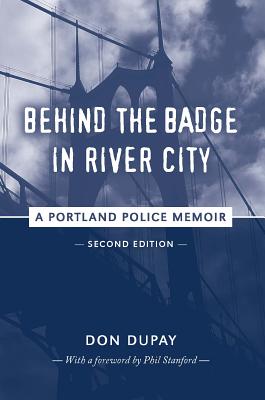 Pimps, prostitutes, safe crackers, murderers, drug addicts, thieves, and thugs--and of course the Portland Police Bureau. Don DuPay introduces them all in this candid, entertaining and brutal look at the stark realities of police work. DuPay, a 17-year veteran of the force has written an intimate memoir that will take the reader on an unforgettable journey, pulling back the curtain to reveal the true and shocking machinagtions that fueled police culture during his time.

Don DuPay was born in Wenatchee Washington, spent several years in Montana and finally came to Portland Oregon in 1947, at the age of eleven, to live permanently. He graduated from Grant High School in 1954, and then studied for two years at Lewis and Clark College. DuPay went on to spend three years active service in the U.S. Navy as a communications technician, performing top secret radio surveillance on the Baltic Sea. After completing military service he joined the Portland Police Bureau in 1961. Promoted to detective in 1967, he remained with PPB until 1978, when he resigned from the force for documented health reasons. DuPay subsequently became director of security for the Benson Hotel in downtown Portland for several years during the 1980s. Years later, he co-hosted a cable access television program called Cannabis Common Sense, for almost five years. DuPay currently resides with his fourth wife, writer, poet and artist Theresa Griffin Kennedy, in Portland, where he continues to write and be published.