Karma of the Sun (Hardcover) 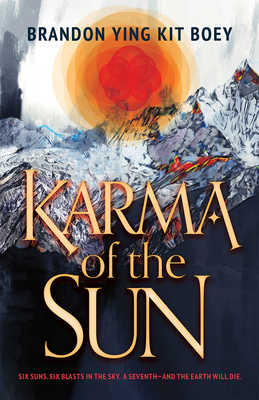 Six Suns, six blasts in the sky; a seventh one, and the earth will die.

In the isolation of the Himalayas, the snows still fall, but they are tinged with the ash of a nuclear winter; the winds still blow, but they wail with the cries of ghosts. The seventh and final blast is near. As the world heaves its final breaths, the people of the Tibetan plateau—civilization’s final survivors—are haunted by spirits and terrorized by warlords. Though the last of the seven prophesied cataclysms is at hand, young Karma searches for a father who disappeared ten years earlier, presumed dead.

Driven by a yearning to see his father again before the end, and called by an eerie horn unheard by anyone else, Karma forges into the Himalayas and discovers that his father’s disappearance may be linked to a mystical mountain said to connect the physical world with the spirit lands—and a possible way to save their doomed future.

“Fans of a post-apocalyptic world that is not a crushingly dystopian one should check this one out.” —Booklist, Starred Review