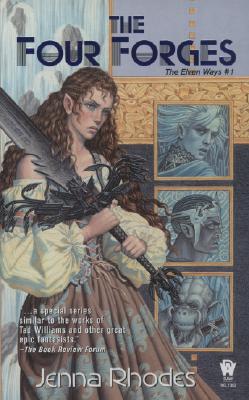 This is book number 1 in the Elven Ways series.

The Four Forges is the first novel in the spellbinding fantasy epic, The Elven Ways.

Brought to the world of Kerith by an unknown cataclysm, the Vaelinar race is both magical and arrogant, considering themselves far superior to the natives whose own magic has been shorn away by a civil war. As hated as they are revered, the Vaelinars have retreated to seclusion after anchoring their magic to the new world by a series of Talent-wrought Ways, passages of power, always hoping that one day they will create the Way back to the world they lost.

Two young people, one broken of soul and the other broken of mind, find their fates intertwined as their mixed bloodlines both curse and bless them. Can a river-borne slave and a street-savvy half-breed find their own personal truth in time to avert another civil war?