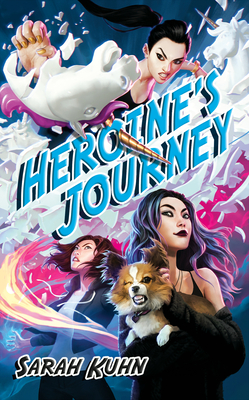 This is book number 3 in the Heroine Complex series.

The third book in the smart, snarky, and action-packed Heroine series completes the "Heroic Trio" as Bea Tanaka joins her sister, Evie, and diva Aveda Jupiter in their quest to free San Francisco from its demon portal problem

If there's one thing Beatrice Tanaka never wanted to be, it's normal. But somehow, her life has unfolded as a series of "should haves." Her powers of emotional projection should have made her one of the most formidable superheroes of all time. And she should have been allowed to join her older sister Evie as a full-fledged protector of San Francisco, pulverizing the city's plethora of demon threats.

But Evie and her superheroing partner, Aveda Jupiter, insist on seeing Bea as the impulsive, tempestuous teenager she used to be--even though she's now a responsible adult. And that means Bea is currently living a thoroughly normal life. She works as a bookstore lackey, hangs out with best friends Sam Fujikawa and Leah Kim, and calms her workplace's more difficult customers. Sure, she's not technically supposed to be playing with people's mental states. But given the mundanity of her existence, who can blame her?

When a mysterious being starts communicating with Bea, hinting at an evil that's about to overtake the city, she seizes the opportunity, hoping to turn her "should haves" into the fabulous heroic life she's always wanted. But gaining that life may mean sacrificing everything--and everyone--she holds dear...

Sarah Kuhn is the author of the Heroine books--starring Asian American superheroines--for DAW Books. She also wrote the romantic comedy novella One Con Glory, which is in development as a feature film. Her articles and essays on such topics as geek girl culture, comic book continuity, and Sailor Moon cosplay have appeared in multiple publications. In 2011, she was selected as a finalist for the CAPE (Coalition of Asian Pacifics in Entertainment) New Writers Award.

“Decisively entertaining and deceptively complex.... Poignant scenes are interspersed with the high jinks fans of the series have come to expect, making this a hugely fun, yet intensely thoughtful take on superheroics and new adulthood.” —Publishers Weekly (starred)

“Interspersed between these high-octane scenes of relationship discovery are intense scenes dealing with the fallout of abandonment.... The emotional tension line was as involving as the magical one, and I found Bea’s voice the most fun of the three books.” —Sherwood Smith, author of the Inda Series

“Kuhn imbues her books simultaneously with great humor and real, raw emotion.... And then she amps it all up with superpowers, demonic forces, and rampaging architectural features.” —Cass Morris, author of From Unseen Fire

“Finally accompanying Bea on her own journey is an honor and a privilege; a hilarious, awkward, rocky, determined honor and privilege.” —Book Riot

“If you looked at Wasp in Ant-Man and the Wasp and immediately demanded more superheroines, then Heroine’s Journey will definitely tickle your fancy.” —Culturess

“These are the superhero books that I would want to live in—with awesome women supporting each other, great representation, fun plots and even a touch of romance!” —All Things Urban Fantasy

“Bea is easy to adore. She’s brilliant, bold, and a butt-kicking heroine in her own right.... Kuhn is brilliant at balancing popcorn thrills with more weighty storylines, and I loved every bit of it.” —Wit and Sin

“Heroine’s Journey is particularly timely because Bea...is facing the struggles so many of us do, foremost of which is attempting to find herself amidst the chaos of family and career and love and life.” —The Roarbots

“I love, love, LOVE this series. It is the cognitive equivalent of a warm hug, a blanket, a kitty, and the best pajama pants I own.” —Confessions of a Curator, Editor, Geek

“This story will resonate with anyone who has ever struggled with being taken seriously by those they love.... As with the first two of the series, this one is a tasty mix of funny, touching, and spicy, hot romance.” —MyShelf