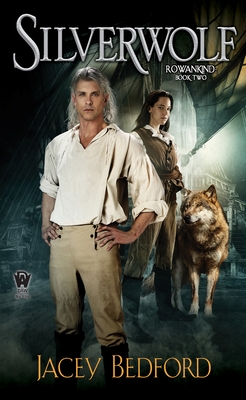 This is book number 2 in the Rowankind series.

Britain, 1801. King George's episodic sanity is almost as damaging as his madness. First Consul Napoleon is gathering his forces in France. The disease of democracy is spreading. The world is poised on the brink of the modern era, but the rowankind, long a source of free labor, have shaken off their bonds.

Some have returned to laru to find freedom with the Fae; others are trying to find a place in the world, looking for fair treatment under the law. The course of the industrial revolution may change forever.

Wild magic is on the rise. Creatures of legend are returning to the world: kelpies, pixies, trolls, hobs, and goblins. Ross and Corwen, she a summoner witch and he a wolf shapechanger, have freed the rowankind from bondage, but now they are caught in the midst of the conflict, while trying their best to avoid the attention of the Mysterium, the government organization which would see them hanged for their magic.

When an urgent letter calls Corwen back to Yorkshire, he and Ross become embroiled in dark magic, family secrets, and industrial treachery. London beckons. There they discover a missing twin, an unexpected friend, and an old enemy—called Walsingham.

Jacey Bedford has a string of short story publication credits on both sides of the Atlantic. She is the co-organizer of the UK Milford's Writers' Conference, a peer-to-peer workshopping week for published SF writers. She lives a thouand feet up on the edge of the Yorkshire Pennines in a two hundred year stone house. She has been a librarian, postmistress, rag-doll maker, and a folk singer in an a cappella trio. She can be found at jaceybedford.co.uk or on Twitter at @JaceyBedford.

Praise for the Rowankind series:

“Swashbuckling action, folklore, and characters to care about: this is an authentic English take on historical fantasy, magic, and class.” —Kari Sperring, author of The Grass King's Concubine

“A fabulous and fun action-packed story, with an engaging heroine.” —Liz Williams, author of The Ghost Sister

“Winterwood is an easy, compelling read which ticks loads of boxes—pirates, fae, adventure, angst, ghosts, wild magic—whilst managing to surprise you with unexpected plot developments and delight you with its beautifully paced story and believably strange world. A delicious page-turner.” —Jaine Fenn, author of Principles of Angels

“Swashbuckling adventure collides with mystical mayhem on land and at sea in this rousing historical fantasy series launch set in a magic-infused England in 1800.” —Publishers Weekly

“It’s like an irresistible smorgasbord of all my favorite themes and fantasy elements all in one place, and a strong, compelling female protagonist was the cherry on top.” —BiblioSanctum

“Pirates, magic, and fae in nineteenth-century England. Yes, please! Winterwood marks the start of Jacey Bedford's new Rowankind series, and it's a series I can't wait for more of!” —No More Grumpy Bookseller