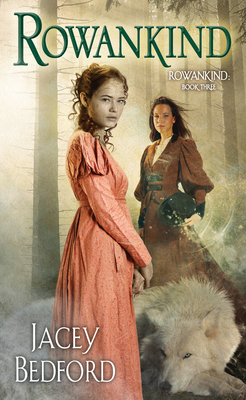 This is book number 3 in the Rowankind series.

The third book of the swashbuckling Rowankind trilogy follows privateer and witch Ross Tremayne as she navigates the magical world of alternate 19th-century Britain.

What do you do with a feral wolf shapechanger who won't face up to his responsibilities? How do you contain magical creatures accidentally loosed into Britain's countryside? How do you convince a crew of barely-reformed pirates to go straight when there's smuggling to be done? How do you find a lost notebook full of deadly spells while keeping out of the clutches of its former owner? How do you mediate between a mad king and the seven lords of the Fae?

Ross and Corwen, she a witch and he a shapechanger, have several problems to solve but they all add up to the same thing. How do you make Britain safe for magic users?

It's 1802. A tenuous peace with France is making everyone jumpy. The Fae, and therefore Ross and Corwen at their behest, have unfinished business with Mad King George, who may not be as mad as everyone thinks--or if he is, he's mad in a magical way. The Fae have left mankind alone up to now because they don't care to get involved with mortals, but don't be fooled into thinking they're harmless.

Jacey Bedford has a string of short story publication credits on both sides of the Atlantic. She is the co-organizer of the UK Milford's Writers' Conference, a peer-to-peer workshopping week for published SF writers. She lives a thouand feet up on the edge of the Yorkshire Pennines in a two hundred year stone house. She has been a librarian, postmistress, rag-doll maker, and a folk singer in an a cappella trio. She can be found at jaceybedford.co.uk or on Twitter at @JaceyBedford.

Praise for the Rowankind series:

“Swashbuckling action, folklore, and characters to care about: this is an authentic English take on historical fantasy, magic, and class.” —Kari Sperring, author of The Grass King's Concubine

“A fabulous and fun action-packed story, with an engaging heroine.” —Liz Williams, author of The Ghost Sister

“Winterwood is an easy, compelling read which ticks loads of boxes—pirates, fae, adventure, angst, ghosts, wild magic—whilst managing to surprise you with unexpected plot developments and delight you with its beautifully paced story and believably strange world. A delicious page-turner.” —Jaine Fenn, author of Principles of Angels

“Swashbuckling adventure collides with mystical mayhem on land and at sea in this rousing historical fantasy series launch set in a magic-infused England in 1800.” —Publishers Weekly

“It’s like an irresistible smorgasbord of all my favorite themes and fantasy elements all in one place, and a strong, compelling female protagonist was the cherry on top.” —BiblioSanctum

“Pirates, magic, and fae in nineteenth-century England. Yes, please! Winterwood marks the start of Jacey Bedford's new Rowankind series, and it's a series I can't wait for more of!” —No More Grumpy Bookseller