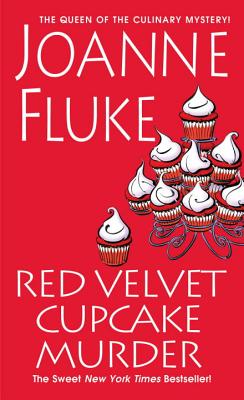 By Joanne Fluke
Email or call for price.
Special Order

This is book number 16 in the A Hannah Swensen Mystery series.

This summer has been warmer than usual in Lake Eden, Minnesota, and Hannah Swensen is trying to beat the heat both in and out of her bakery kitchen. But she's about to find out the hard way that nothing cools off a hot summer day like a cold-blooded murder.

It's a hot summer evening in Lake Eden, Minnesota—and the grand opening of the refurbished Albion Hotel. Hanna Swensen's famous red velvet cupcakes are being served in the new Red Velvet lounge. The party starts off with a bang with the arrival of Doctor Bev, who left town in shame after she two-timed her fiancé. But the gossip comes to a screeching halt when another partygoer takes a dive off the hotel's roof. As the police investigate, the only one who isn't preoccupied with the case is Doctor Bev. She's too busy trying to stir things up with her old flame, Norman.

"Culinary cozies don't get any tastier than this winning series." —Library Journal

"If your reading habits alternate between curling up with a good mystery or with a good cookbook, you ought to know about Joanne Fluke." —Charlotte Observer

JOANNE FLUKE is the New York Times bestselling author of the Hannah Swensen mysteries, which include Double Fudge Brownie Murder, Blackberry Pie Murder, Cinnamon Roll Murder, and the book that started it all, Chocolate Chip Cookie Murder. That first installment in the series premiered as Murder, She Baked:  A Chocolate Chip Cookie Mystery on the Hallmark Movies & Mysteries Channel. Like Hannah Swensen, Joanne Fluke was born and raised in a small town in rural Minnesota, but now lives in Southern California. Please visit her online at www.JoanneFluke.com