The Twelve Kingdoms: The Talon of the Hawk (Paperback) 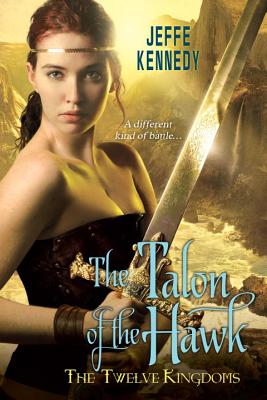 This is book number 3 in the The Twelve Kingdoms series.

Three daughters were born to High King Uorsin, in place of the son he wanted. The youngest, lovely and sweet. The middle, pretty and subtle, with an air of magic. And the eldest, the Heir. A girl grudgingly honed to leadership, not beauty, to bear the sword and honor of the king.

Ursula’s loyalty is as ingrained as her straight warrior’s spine. She protects the peace of the Twelve Kingdoms with sweat and blood, her sisters from threats far and near. And she protects her father to prove her worth. But she never imagined her loyalty would become an open question on palace grounds. That her father would receive her with a foreign witch at one side and a hireling captain at the other—that soldiers would look on her as a woman, not as a warrior. She also never expected to decide the destiny of her sisters, of her people, of the Twelve Kingdoms and the Thirteenth. Not with her father still on the throne and war in the air. But the choice is before her. And the Heir must lead…

Jeffe Kennedy is an award-winning author with a writing career that spans decades. She lives in Santa Fe, with two Maine coon cats, a border collie, plentiful free-range lizards and a Doctor of Oriental Medicine. Jeffe can be found online at JeffeKennedy.com, or every Sunday at the popular Word Whores blog.

Praise for The Mark of the Tala