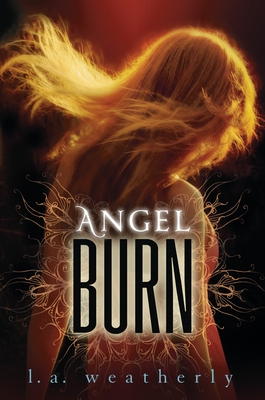 This is book number 1 in the Angel series.

“I've always harbored suspicions about angels. Angel Burn is a revelation, and we all know what they're really up to now! Weatherly has turned angel lore upside down to reveal the secrets under there twinkly robes and feathers, packing in page after page of rollicking action and creating a strong cast of characters with humor, depth, and humanity. She redefines the 'journey of self-discovery' in a dreamlike, almost schizophrenic introduction to the angel within Willow in a tight story package that promises to only get better in the next installment.”
— Elizabeth Anker, Alamosa Books, Albuquerque, NM

They’re out for your soul . . . and they don’t have heaven in mind.

Willow knows she’s different from other girls, and not just because she loves tinkering with cars. Willow has a gift. She can look into the future and know people’s dreams and hopes, their sorrows and regrets, just by touching them. She has no idea where this power comes from. But the assassin, Alex, does. Gorgeous, mysterious Alex knows more about Willow than Willow herself. He knows that her powers link to dark and dangerous forces, and that he’s one of the few humans left who can fight them. When Alex finds himself falling in love with his sworn enemy, he discovers that nothing is as it seems, least of all good and evil. In the first book in an action-packed, romantic trilogy, L.A. Weatherly sends readers on a thrill-ride of a road trip — and depicts the human race at the brink of a future as catastrophic as it is deceptively beautiful.

L. A. Weatherly is the author of several books for young adults, including Child X. About Angel Burn, she says, “I've known Alex for a long time. He first came to me as a character almost twenty years ago, when he was a thief in a fantasy setting — an expert with knives rather than guns. Nothing came of that particular novel, but Alex always stayed with me. He refused to go away, in fact! And over the years, I began to wonder about redoing his story completely and placing him in a contemporary setting.” L. A. Weatherly was born in Little Rock, Arkansas, and now lives in England.

Weatherly's plot and writing are first-rate, adrenaline- fueled while still taking the time to thoughtfully develop the characters and build the romance. This elevated twist on the angel genre deserves to be spread far and wide.
—Publishers Weekly (starred review)

A thrilling, action-packed story with insidious villains and a disturbing conclusion
—Booklist

Weatherly has done for angels what Twilight did for vampires, turning the mythology on its head.
—VOYA

Packed with action and romance, culminating in a conclusion full of gratifying revelations.
—The Horn Book

Fans of supernatural suspense with a generous dollop of romance will be clamoring for the next book.
—School Library Journal