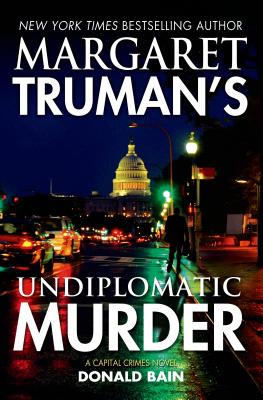 By Margaret Truman, Donald Bain
Email or call for price.
Out of Print

This is book number 27 in the Capital Crimes series.

Private investigator Robert Brixton has always hated Washington. Against his better judgment, he decides to stick around and take a job as an agent in a new State Department security agency headed by his former boss at the Washington P.D. After work one day he meets his youngest daughter, Janet, for a drink at an outdoor cafe. Shockingly, a young Arabic woman blows herself up, killing Janet and a dozen others. Seeking revenge for his daughter, Brixton follows the tracks of the bomber to a powerful senator's son.

Brixton finds himself digging deep into what turns out to be a small but powerful cabal whose goal is to kill embassy workers from nations involved in the invasion of Iraq and Afghanistan. Donald Bain thrills again with Undiplomatic Murder, the riveting next installment in the Margaret Truman's beloved Capital Crimes series.