Empire Games: A Tale of the Merchant Princes Universe (Hardcover) 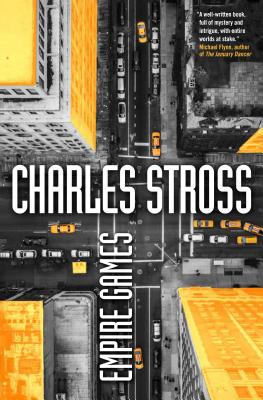 By Charles Stross
Email or call for price.
Special Order

This is book number 1 in the Empire Games series.

Charles Stross builds a new series with Empire Games, expanding on the world he created in the Family Trade series, a new generation of paratime travellers walk between parallel universes.

The year is 2020. It's seventeen years since the Revolution overthrew the last king of the New British Empire, and the newly-reconstituted North American Commonwealth is developing rapidly, on course to defeat the French and bring democracy to a troubled world. But Miriam Burgeson, commissioner in charge of the shadowy Ministry of Intertemporal Research and Intelligence—the paratime espionage agency tasked with catalyzing the Commonwealth's great leap forward—has a problem. For years, she's warned everyone: "The Americans are coming." Now their drones arrive in the middle of a succession crisis.

In another timeline, the U.S. has recruited Miriam's own estranged daughter to spy across timelines in order to bring down any remaining world-walkers who might threaten national security.

Two nuclear superpowers are set on a collision course. Two increasingly desperate paratime espionage agencies try to find a solution to the first contact problem that doesn't result in a nuclear holocaust. And two women—a mother and her long-lost daughter—are about to find themselves on opposite sides of the confrontation.

CHARLES STROSS is a full-time science fiction writer and resident of Edinburgh, Scotland. He has won three Hugo Awards for Best Novella, including for the Laundry Files tale “Equoid.” His work has been translated into over twelve languages. His novels include the bestselling Merchant Princes series, the Laundry series (including Locus Award finalist The Dilirium Brief), and several stand-alones including Glasshouse, Accelerando, and Saturn's Children.

Like many writers, Stross has had a variety of careers, occupations, and job-shaped catastrophes, from pharmacist (he quit after the second police stakeout) to first code monkey on the team of a successful dot-com startup (with brilliant timing, he tried to change employers just as the bubble burst) to technical writer and prolific journalist covering the IT industry. Along the way he collected degrees in pharmacy and computer science, making him the world’s first officially qualified cyberpunk writer.

"A well-written book, full of mystery and intrigue, with entire worlds at stake." —Michael Flynn

"If you like the spy novels of Ian Fleming, or Len Deighton, as I do, but also appreciate a genre twist, then you’ll love Empire Games. It is intelligent, entertaining and yet also a little scary." —SFFWorld.com


Praise for The Merchant Princes Series

"Stross is not a writer who aims to leave his readers reassured: One can’t tell which way he’s going to go, nor whose side he’s on. No one beats him at hypertech either." —The Wall Street Journal