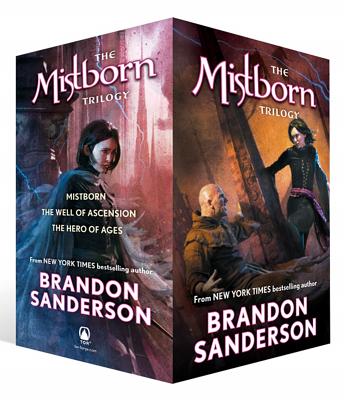 By Brandon Sanderson
$28.97
Email or call for price

This boxed set includes the paperback editions of the complete Mistborn Trilogy--Mistborn, The Well of Ascension, and The Hero of Ages--by #1 New York Times bestselling author Brandon Sanderson. This wildly popular epic fantasy series is for ages 13 and up.

Once, a hero rose to save the world. He failed.

For a thousand years since, the world has been a wasteland of ash and mist ruled by the immortal emperor known as the Lord Ruler. Every revolt has failed miserably.

Yet somehow, hope survives and a new kind of uprising is being planned-one that depends on the cunning of a brilliant criminal mastermind and the determination of an unlikely heroine: a teenage street urchin named Vin.

Once, a hero rose to save the world and failed. This time, can a young heroine succeed?

"If you're a fan of fantasy and haven't read the Mistborn trilogy yet, you have no excuses. Go buy a copy." -Forbes on the Mistborn Trilogy