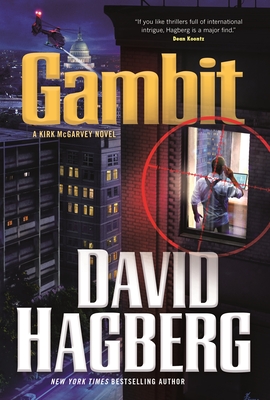 This is book number 26 in the McGarvey series.

The latest Kirk McGarvey novel, Gambit, is an international thriller with non-stop action, perfect for fans of Jason Bourne.

“If you like thrillers full of international intrigue, Hagberg is a major find.” —Dean Koontz, New York Times bestselling author

An American billionaire and a Russian oligarch want Kirk McGarvey dead. First they send a South African assassin, and when Mac kills him, they commission a Canadian sniper for the kill. When Mac put him down, they hire a team of highly specialized Chinese killers called “Scorpions.” When Mac dispatches them, they send a squad of Russian special ops armed to the teeth with high-tech firepower.

Mac's only chance of survival is to turn on the tables on the people behind this assassination conspiracy, that is, if he can find them.

David Hagberg (1947-2019) was a New York Times bestselling author who published numerous novels of suspense, including his bestselling thrillers featuring former CIA director Kirk McGarvey, which include Abyss, The Cabal, The Expediter, and Allah’s Scorpion. He earned a nomination for the American Book Award, three nominations for the Mystery Writers of America Edgar Allan Poe Award and three Mystery Scene Best American Mystery awards. He spent more than thirty years researching and studying US-Soviet relations during the Cold War. Hagberg joined the Air Force out of high school, and during the height of the Cold War, he served as an Air Force cryptographer.

“If you like thrillers full of international intrigue, Hagberg is a major find.”
—Dean Koontz, New York Times bestselling author