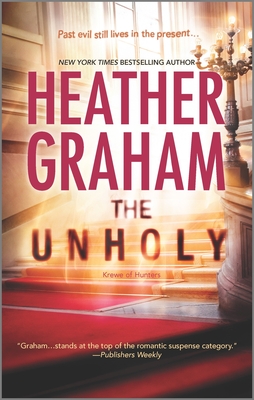 By Heather Graham
Email or call for price.
Special Order

The 1940s: Hard-boiled detectives and femmes fatale are box-office gold. In one iconic scene, set in a deserted museum, the private eye arrives too late, and the buxom beauty is throttled by an ominous Egyptian priest. Now: The Black Box Cinema immortalizes Hollywood's Golden Age in its gallery of film noir tributes. But the mannequin of that Egyptian priest is hardly lifeless. He walks--and a young starlet dies a terrifying death. Movie mogul Eddie Archer's son is charged with the grisly murder. Eddie calls agent Sean Cameron, who specializes in irregular investigations. As part of an FBI paranormal forensics team, Cameron knows that nightmares aren't limited to the silver screen. Working with special-effects artist Madison Darvil--who has her own otherworldly gifts--Cameron delves into the malevolent force animating more than one movie monster....

New York Times and USA Today bestselling author Heather Graham has written more than a hundred novels. She's a winner of the RWA's Lifetime Achievement Award, and the Thriller Writers' Silver Bullet. She is an active member of International Thriller Writers and Mystery Writers of America. For more information, check out her websites: TheOriginalHeatherGraham.com, eHeatherGraham.com, and HeatherGraham.tv. You can also find Heather on Facebook.

"Graham...stands at the top of the romantic suspense category. -Publishers Weekly

"Graham expertly blends a chilling history of the mansion's former residents with eerie phenomena, once again demonstrating why she stands at the top of the romantic suspense category." --Publisher's Weekly on Phantom Evil, Starred Review

"A fast-paced and suspenseful read that will give readers chills while keeping them guessing until the end."

"If you like mixing a bit of the creepy with a dash of sinister and spine-chilling reading with your romance, be sure to read Heather Graham's latest...Graham does a great job of blending just a bit of paranormal with real, human evil."

"Heather Graham will keep you in suspense until the very end."

-Kirkus on The Death Dealer

"The paranormal elements are integral to the

are likable, the romance convincing, and, in the

depiction of a lost city is especially poignant."

"Graham's rich, balanced thriller sizzles with equal parts suspense, romance and the paranormal-all of it nail-biting."

-Publishers Weekly on The Vision