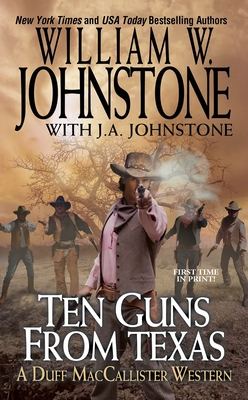 This is book number 6 in the A Duff MacCallister Western series.

The MacCallister family is legendary in the American frontier. And wherever a MacCallister travels, the legend--and the guns--follow.

When Duff MacCallister journeys to Texas to deliver 100 head of angus cattle, he finds a land on fire. Unruly, lawless teams of fence cutters, branded Blue Devils by the locals, are rampaging across grazing land and cutting fences in the name of an eastern land company. The ranchers are fighting back, and Duff joins the fray. But the fight leads to Austin, and into an even deadlier mission.

The governor's daughter has been kidnapped by Blue Devils. Duff and his partner Elmer are willing to go after her, but they're going to need more men and a lot more firepower. The best the governor can do is three outlaws who once served honorably in war. Now Duff MacCallister is going up again a fanatical, highly trained enemy, riding with gunmen he cannot fully trust. Once the shooting starts, there is no turning back--because Duff and his posse are heading straight into the bloody depths of hell.

William W. Johnstone is the USA Today and New York Times bestselling author of over 250 books, including the popular Mountain Man, The Family Jensen, MacCallister, and many other western series.. Visit his website at www.williamjohnstone.net or by email at dogcia@aol.com.

Being the all around assistant, typist, researcher, and fact checker to one of the most popular western authors of all time, J.A. Johnstone learned from the master, Uncle William W. Johnstone. Bill, as he preferred to be called, began tutoring J.A. at an early age. After-school hours were often spent retyping manuscripts or researching his massive American Western History library as well as the more modern wars and conflicts. J.A. worked hard--and learned. "Every day with Bill was an adventure story in itself. Bill taught me all he could about the art of storytelling and creating believable characters. ‘Keep the historical facts accurate,'  he would say. ‘Remember the readers, and as your grandfather once told me, I am telling you now: be the best J.A. Johnstone you can be.'"