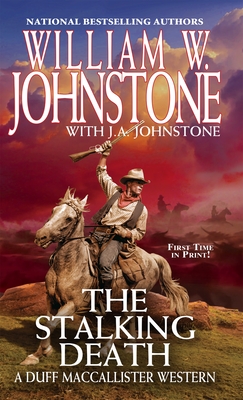 This is book number 8 in the A Duff MacCallister Western series.

Johnstone Country. Where others fear to tread.

Descended from Scottish Highlanders and blood kin to Falcon and Jamie Ian, Duff MaCallister forged a bold new life on the American frontier. But he will always stay true to his clan’s fighting spirit—when it comes to justice . . .

There’s something rotten in Wyoming, and it’s not just the smell of cow pies—the first whiff is coming off the Laramie County Cattlemen. Right off the bat, Duff notices something odd: no small-time ranchers allowed. It’s big-leaguers only. And none are bigger than Brad Houser, owner of the sprawling Twin Peaks ranch. He’s up in arms over the small-timers claiming the unbranded mavericks who escape their herds. Which is perfectly legal. No brand, free cow.

Houser has a plan to stop these former cowboys from taking their runaways. For $1000, Houser will make the small ranchers go away—six feet under. That makes Duff MacCallister madder than a wet hen . . . and his guns will do the screaming.

“Every day with Bill was an adventure story in itself. Bill taught me all he could about the art of storytelling. ‘Keep the historical facts accurate,’ he would say. ‘Remember the readers, and as your grandfather once told me, I am telling you now: be the best J.A. Johnstone you can be.”