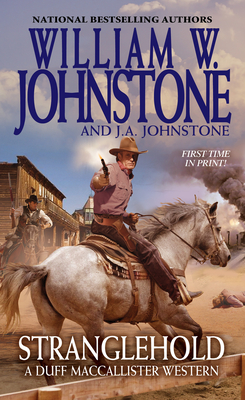 By William W. Johnstone, J.A. Johnstone
$7.99
NOT ON OUR SHELVES- available for order, usually ships in 1-5 days

This is book number 9 in the A Duff MacCallister Western series.

Johnstone Country. Where others fear to tread.

Descended from a long line of fighters, lovers, and dreamers, the MacCallister clan are legends in their homeland of Scotland. But when Duff MacCallister came to America, it seems he brought the legend—and the war—along with him . . .

Here in America, life is full of surprises. Duff never expected to hear from his old friend Charles McGregor, his batallion commander from the Black Watch Regiment of Her Majesty’s army. Turns out McGregor lives in New Mexico now. And he needs Duff’s help. He’s started a new life as the mayor of Antelope Wells—a mining town that’s being targeted by a power-hungry madman Ebenezer Schofield, who wants to declare the whole area an independent principality—and himself as king. He’s already squeezing taxes out of the local businesses and citizens. But no one has the guts to stop him. Because Schofield’s got his own private army of fifty uniformed men, six Mexican revolution cannons—and a traitor working on his side in the heart of Antelope Wells . . .

This is more than just a favor for a friend. This is justice. This is payback. This is war. And this is Duff MacCallister.

“Every day with Bill was an adventure story in itself. Bill taught me all he could about the art of storytelling. ‘Keep the historical facts accurate,’ he would say. ‘Remember the readers, and as your grandfather once told me, I am telling you now: be the best J.A. Johnstone you can be.’”