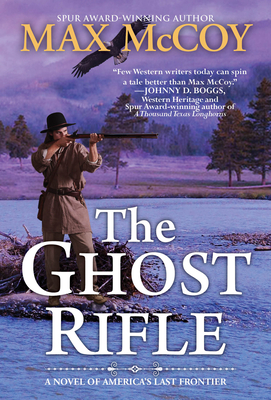 Descended from a long line of ramblers and rogues, Jack Picaro came to America to seek his fortune. But after killing his best friend in a drunken duel, the apprentice gunsmith flees westward, behind children he does not know, Gus and April. As Jack ventures up the Missouri River, he finds an unspoiled land where a man can live free--and also be attacked by an Arikara war party. His rifle stolen in the bloody skirmish, Jack sets out alone to reclaim it. His wild escapade ends in a fight to the death with a legendary Crow warrior named Standing Wolf. So begins a fateful epic search across the last frontiers of the untamed West. From the muddy banks of the Mississippi to the shining peaks of the Rockies, Jack Picaro will leave a trail of clues for an abandoned son, Gus, to find him: a famous gunsmith who will make history with a weapon of his own design--and forged a legend that would be passed down for generations. This is the story of . . .

Max McCoy is an award-winning novelist and journalist, an associate professor at Emporia State University, and director of the Tallgrass Writing Workshop. A three-time Spur Award winner and the recipient of the 2018 National Outdoor Book Award, his novels Of Grave Concern and Hellfire Canyon were both named Notable Books by the State Library of Kansas. In addition to writing dark, offbeat Westerns and historical fiction, he's the author of thrillers, original Indiana Jones adventures, the novelization of Steven Spielberg's epic miniseries "Into the West," and the first three volumes in Wylde's West, a paranormal mystery series. McCoy began his career in journalism at the Pittsburg Morning Sun and writing for pulp magazines such as "True Detective" and "Front-Page Detective." As investigative writer for The Joplin Globe, he won two first-place awards in investigative journalism for his stories on serial killers and hate groups. Originally from Baxter Springs, Kansas, he lives in Emporia and can be found online at MaxMcCoy.com.