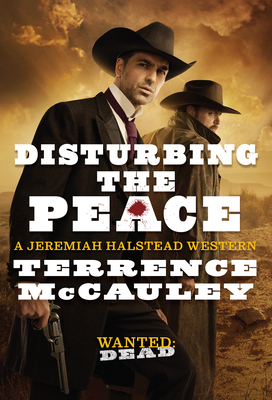 This is book number 2 in the A Jeremiah Halstead Western series.

Award-winning, critically acclaimed author Terrence McCauley has drawn comparisons to Elmore Leonard for his skilled writing of traditional historical Westerns with a crime fiction soul. Now be brings his signature historical accuracy, three-dimensional characters, and non-stop, adrenaline-fueled action to the second Jeremiah Halstead Western. He may be the newest Deputy Marshal in the Montana Territory, but it doesn’t take long for him to find himself in a mess of trouble…

Deputy U.S. Marshal Jeremiah Halstead keeps the peace in the mining town of Silver Cloud, Montana. But an old enemy has declared war against him.

Ruthless and clever, Ed Zimmerman would have become the leader of one of the west’s deadliest and hell-bent outlaw gangs. Zimmerman has offered a generous bounty to every desperado willing to put a bullet through the U.S. Deputy Marshal’s heart.

A death sentence won’t stop Halstead from enforcing the law. The sheriff of Battle Brook needs a hand dealing with some hell-raising badmen in the surrounding hills, threatening to take over the frontier town. Joined by Deputy Sandborne, Halstead rides hard for Battle Brook only to discover manhunters aware of the price on his head are in town, guns cocked and ready to collect the reward.

And Zimmerman has joined the outlaws in the hills, waiting to catch Halstead in his sights. . .

Terrence P. McCauley is an award-winning writer of crime fiction, thrillers, historical fiction and Westerns. His Western fiction debut, Where the Bullets Fly, received a Western Fictioneers Peacemaker Award and was named Best New Western Paperback of the Year by True West magazine. Both Where the Bullets Fly and its follow-up, Dark Territory, were Spur Award-finalists. His short stories have been featured in Thuglit, Spinetingler Magazine, Shotgun Honey, Big Pulp, and other publications. An ITW Award nominee, he is a recipient of the Silver Medal for Historical Fiction from the Military Writers Society of America. He is a member of the New York City chapter of the Mystery Writers of America, the International Thriller Writers, the International Crime Writers Association, and the Montana Historical Society. A proud native of the Bronx, New York, he can be found online on Facebook, Twitter or at TerrencePMcCauley.com.