The Adversary: A True Story of Monstrous Deception (Hardcover) 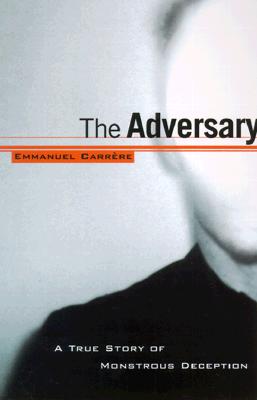 The shocking true story of a respectable doctor, eighteen years of lies, five murders, and the extremes to which ordinary people can go.

"On the Saturday morning of January 9, 1993, while Jean-Claude Romand was killing his wife and children, I was with mine in a parent-teacher meeting." So Emmanuel Carrère, acclaimed master of psychological suspense, begins this riveting tale of unfathomable deception. Who could have imagined Romand as a murderer? He was, after all, a noted physician at the World Health Organization, a groundbreaking researcher with connections to international humanitarians, a financial wizard entrusted with his in-laws' savings, a loving son who called his parents every evening. If there was a problem, no one knew it. As it turned out, there were many: Romand had no medical degree; he had no job; he knew no one famous; he had spent his in-laws' money. And when a relative went to break the terrible news about Romand's wife and children to his parents, they too were dead -- murdered by the stranger who had been their son.

A mesmerizing account of the hundreds of daily lies that propelled one man's life, The Adversary -- another name for the Devil in the Bible -- is also a meditation on the mystery of identity, evil, and the desperate logic by which it is easier to kill than to confess.

Emmanuel Carrere, novelist, filmmaker, journalist, and biographer, is the award-winning internationally renowned author of "The Adversary" (a "New York Times" Notable Book), "Lives Other Than My Own," "My Life As A Russian Novel," "Class Trip" and "The Mustache." Carrere lives in Paris.

"A thriller suffused with ominous tension." --The New Yorker, on Class Trip

"Fine and glossy and inexorable...stunning." --John Updike, The New Yorker, on The Mustache

"Emmanuel Carrère is a master of high-standard deviation." --Spin