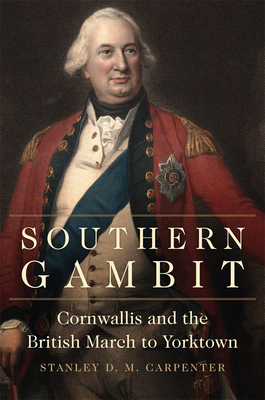 By Stanley D. M. Carpenter
Email or call for price.
NOT ON OUR SHELVES- available for order, usually ships in 1-5 days


In a world rife with conflict and tension, how does a great power prosecute an irregular war at a great distance within the context of a regional struggle, all within a global competitive environment? The question, so pertinent today, was confronted by the British nearly 250 years ago during the American War for Independence. And the answer, as this book makes plain, is: not the way the British, under Lieutenant General Charles, Earl Cornwallis, went about it in the American South in the years 1778-81. Southern Gambit presents a closely observed, comprehensive account of this failed strategy. Approaching the campaign from the British perspective, this book restores a critical but little-studied chapter to the narrative of the Revolutionary War--and in doing so, it adds detail and depth to our picture of Cornwallis, an outsize figure in the history of the British Empire. Distinguished scholar of military strategy Stanley D. M. Carpenter outlines the British strategic and operational objectives, devoting particular attention to the strategy of employing Southern Loyalists to help defeat Patriot forces, reestablish royal authority, and tamp down resurgent Patriot activity. Focusing on Cornwallis's operations in the Carolinas and Virginia leading to the surrender at Yorktown in October 1781, Carpenter reveals the flaws in this approach, most notably a fatal misunderstanding of the nature of the war in the South and of the Loyalists' support. Compounding this was the strategic incoherence of seeking a conventional war against a brilliant, unconventional opponent, and doing so amidst a breakdown in the unity of command. Ultimately, strategic incoherence, ineffective command and control, and a misreading of the situation contributed to the series of cascading failures of the British effort. Carpenter's analysis of how and why this happened expands our understanding of British decision-making and operations in the Southern Campaign and their fateful consequences in the War for Independence.