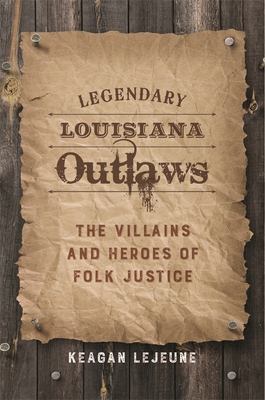 From the infamous pirate Jean Laffite and the storied couple Bonnie and Clyde, to less familiar bandits like train-robber Eugene Bunch and suspected murderer Leather Britches Smith, Legendary Louisiana Outlaws explores Louisiana's most fascinating fugitives.
In this entertaining volume, Keagan LeJeune draws from historical accounts and current folklore to examine the specific moments and legal climate that spawned these memorable characters. He shows how Laffite embodied Louisiana's shift from an entrenched French and Spanish legal system to an American one, and relates how the notorious groups like the West and Kimbrell Clan served as community leaders and law officers but covertly preyed on Louisiana's Neutral Strip residents until citizens took the law into their own hands. Likewise, the bootlegging Dunn brothers in Vinton, he explains, demonstrate folk justice's distinction between an acceptable criminal act (operating an illegal moonshine still) and an unacceptable one (cold-blooded murder).
Recounting each outlaw's life, LeJeune also considers their motives for breaking the law as well as their attempts at evading capture. Running from authorities and trying to escape imprisonment or even death, these men and women often relied on the support of ordinary citizens, sympathetic in the face of oppressive and unfair laws. Through the lens of folk life, LeJeune's engaging narrative demonstrates how a justice system functions and changes and highlights Louisiana's particular challenges in adapting a system of law and order to work for everyone.

Keagan LeJeune is professor of English at McNeese State University, past president of the Louisiana Folklore Society, and editor of its journal, Louisiana Folklore Miscellany. He has collected stories about outlaws and Louisiana folklore for more than fifteen years.