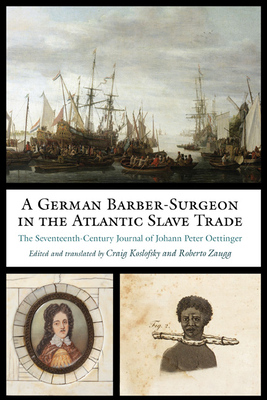 By Johann Peter Oettinger, Craig Koslofsky (Translator), Roberto Zaugg (Translator)
Email or call for price.
NOT ON OUR SHELVES- available for order, usually ships in 1-5 days

As he traveled across Germany and the Netherlands and sailed on Dutch and Brandenburg slave ships to the Caribbean and Africa from 1682 to 1696, the young German barber-surgeon Johann Peter Oettinger (1666-1746) recorded his experiences in a detailed journal, discovered by Roberto Zaugg and Craig Koslofsky in a Berlin archive. Oettinger's journal describes shipboard life, trade in Africa, the horrors of the Middle Passage, and the sale of enslaved captives in the Caribbean.

Translated here for the first time, A German Barber-Surgeon in the Atlantic Slave Trade documents Oettinger's journeys across the Atlantic, his work as a surgeon, his role in the purchase and branding of enslaved Africans, and his experiences in France and the Netherlands. His descriptions of Amsterdam, Cura ao, St. Thomas, and Suriname, as well as his account of societies along the coast of West Africa, from Mauritania to Gabon, contain rare insights into all aspects of Europeans' burgeoning trade in African captives in the late seventeenth century. This journeyman's eyewitness account of all three routes of the triangle trade will be invaluable to scholars of the early modern world on both sides of the Atlantic.

Craig Koslofsky, Professor of History and Germanic Languages and Literatures at the University of Illinois at Urbana-Champaign, is author of Evening's Empire: A History of the Night in Early Modern Europe. Roberto Zaugg, Professor of Early Modern History at the University of Zurich, is coeditor of Union in Separation: Diasporic Groups and Identitiesin the Eastern Mediterranean (1100-1800).