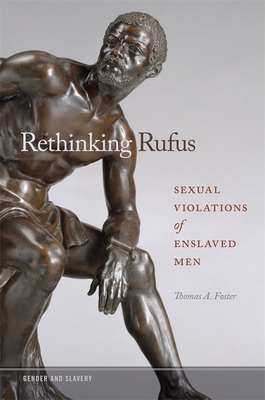 Rethinking Rufus is the first book-length study of sexual violence against enslaved men. Scholars have extensively documented the widespread sexual exploitation and abuse suffered by enslaved women, with comparatively little attention paid to the stories of men. However, a careful reading of extant sources reveals that sexual assault of enslaved men also occurred systematically and in a wide variety of forms, including physical assault, sexual coercion, and other intimate violations.

To tell the story of men such as Rufus--who was coerced into a sexual union with an enslaved woman, Rose, whose resistance of this union is widely celebrated--historian Thomas A. Foster interrogates a range of sources on slavery: early American newspapers, court records, enslavers' journals, abolitionist literature, the testimony of formerly enslaved people collected in autobiographies and in interviews, and various forms of artistic representation. Foster's sustained examination of how black men were sexually violated by both white men and white women makes an important contribution to our understanding of masculinity, sexuality, the lived experience of enslaved men, and the general power dynamics fostered by the institution of slavery. Rethinking Rufus illuminates how the conditions of slavery gave rise to a variety of forms of sexual assault and exploitation that affected all members of the community.

THOMAS A. FOSTER is an associate dean for faculty affairs and a history professor at Howard University. He is the author of Sex and the Eighteenth-Century Man: Massachusetts and the History of Sexuality in America and Sex and the Founding Fathers: The American Quest for a Relatable Past.