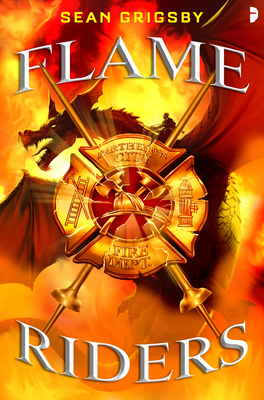 In the final instalment of the Smoke Eaters series, the New United States Army has taken over and America has devolved into a full-on dragon apocalypse. Smoke eaters are banned and have gone into hiding to avoid being held prisoner by the soldiers.

Guiellermo Contreras is a private in the NUSA, and when he's accused of potentially being a smoke eater upon pain of death, he escapes and sets out to find the heroes who disappeared years before. But what he discovers is that the NUSA has been working on something unthinkable, and it's going to take more than a few smoke eaters to stop them.

SEAN GRIGSBY is a professional firefighter in central Arkansas, where he writes about lasers, aliens, and guitar battles with the Devil when he's not fighting dragons. He grew up on Goosebumps books in Memphis, Tennessee, and hosts the Cosmic Dragon podcast.

"Grigsby’s final Smoke Eaters urban fantasy (after Ash Kickers) is resplendent with action and adventure… a series finale as fun as it is satisfying."
– Publishers Weekly

“This is a five-alarm fire of a novel! Irreverent, action-packed, and utterly compelling from start to finish. Fans of this series will love it!”
– D.B. Jackson, author of the Thieftaker Chronicles

“Grigsby’s pulse-pounding sequel to Smoke Eaters is a worthy successor that expands on the series’ already strong foundation of vivid action and meticulous worldbuilding… vibrantly imagined characters who ring with authenticity, and firefighter Grigsby knows just how to pull readers into scenes full of smoke and flame. Readers will delight in this fresh take on action fantasy.”
– Publishers Weekly

“Starting with its title, Ash Kickers, tells you exactly what type of ride you’re in for then delivers on that promise with a story that hits like a Skyrim meets Ghostbusters battle royale. In it, you can almost feel Grigsby’s glee as he mixes together supersized heroics, mythic creatures, snappy dialogue, and furious fight scenes to form a narrative that reads like a passionate homage to the action blockbusters we all grew up watching.”
– Evan Winter, author of The Rage of Dragons

“An ingenious premise that Grigsby delivers on with intelligence and style. Smoke Eaters is a treat!”
– Jason M Hough, New York Times Bestseller

“Smoke Eaters is a thrilling, exciting, funny and strangely heart-warming book, and Grigsby’s experience as a firefighter shines through on every page, lending grit and realism to this rollicking ride of a tale in which firefighters become dragon-slayers. It’s exactly as bonkers – and as brilliant – as you’d expect and I look forward to more from this author.”
– Anna Stephens, author of Godblind

"Ash Kickers is instinctively and perceptively created and a joy to read. This has been a genuine pleasure to join Tamerica and her team and I look forward to more."
– Geek Syndicate