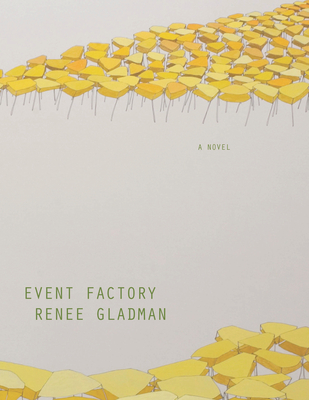 “More Kafka than Kafka, Renee Gladman’s achievement ranks alongside many of Borges’ in its creation of a fantastical landscape with deep psychological impact.” —Jeff VanderMeer

A “linguist-traveler” arrives by plane to Ravicka, a city of yellow air in which an undefined crisis is causing the inhabitants to flee. Although fluent in the native language, she quickly finds herself on the outside of every experience. Things happen to her, events transpire, but it is as if the city itself, the performance of life there, eludes her. Setting out to uncover the source of the city’s erosion, she is beset by this other crisis—an ontological crisis—as she struggles to retain a sense of what is happening.

Event Factory is the first in a series of novels (also available are the second, The Ravickians; the third, Ana Patova Crosses a Bridge; and the fourth, Houses of Ravicka) that Renee Gladman is writing about the invented city-state of Ravicka, a foreign “other” place fraught with the crises of American urban experience, not least the fundamental problem of how to move through the world at all.

Renee Gladman was born in Atlanta in 1971. She is the author of numerous books of fiction, nonfiction, and poetry. At the core of her work is a critically acclaimed cycle of novels about the imagined city-state of Ravicka and its inhabitants: Event Factory (2010), The Ravickians (2011), Ana Patova Crosses a Bridge (2013), and Houses of Ravicka (2017). A graduate of Vassar College and New College of California, she was recipient of a 2021 Windham-Campbell Prize from Yale University, as well as grants and residencies from Harvard’s Radcliffe Institute for Advanced Study (2015) and the Lannan Foundation (2017), among other institutions. Gladman makes her home in New England.

“Renee Gladman has always struck me as being a dreamer—she writes that way and the dreaming seems to construct the architecture of the world unfolding before our reading eyes. In Event Factory the details of her dream gleam specifically yet they bob on the surface of a deeper wider abyss we all might be becoming engulfed in. It has the strange glamour of Kafka’s Amerika, this book, but the narrator, lusty and persuasive, is growing up.” —Eileen Myles

“In Renee Gladman’s extraordinary Event Factory, the world in all its languaged variousness adumbrates a ‘yellow-becoming’ map for our deepest internal spelunkings, a map we don’t dare do without as we negotiate, along with our intrepid narrator, the world of Ravicka, the sprawling city, where, we might say, to borrow from Gladman, ‘nothing happens, nothing happens, then everything is ‘said’ to happen . . .’ and where we might also say, to borrow from Beckett, the magnifying and minifying mirrors have been shattered and the body has, yes, ‘vanished in the havoc of its images.’” —Laird Hunt

“Event Factory is a profound study of the architecture of being, knowledge, memory, and desire.” —Review of Contemporary Fiction

“Gladman is more fantasist than estranging analyst. The quality of her dreaming, its interior abstraction, is exquisite. Its wonder lies in how closed its shutters are to any mundane world, how far back the lanes and alleyways of its imagining recede from the proper nouns and pedestrianisms of our lives.” —n+1

"The Ravikian novels exalt the primacy of language to further imaginative possibility, which dominant and oppressive regimes would shut down. Gladman's writing cleaves to the luminous. It slips through the gaps in our thinking to pluralise, queer, subvert, and mobilise. These books are strange but, through a bright and deft poetic obliquity, they shine an incomparable light onto our contemporary moment." —The White Review

"The Ravicka books—flagships of the elegant small press Dorothy—are what usually get classified as 'poet's novels,' like Anne Carson's Autobiography of Red or My Life by Lyn Hejinian, but in this case, that's a cop-out. Gladman writes and publishes poetry, nonfiction, and novels with the same frequency. I doubt she makes much distinction between disciplines (and in fact she resembles a visual artist in her staunch pursuit of a theme through varied layers of form and abstraction)." —BOMB

“[The Ravicka] books are absurd and surreal, and are stabilized by an eerie interior logic: Think The Phantom Tollbooth for adults.” —The Atlantic

“In this wondrously wandering book, an unnamed woman travels to the mysterious city of Ravicka, a city which is slowly and inconceivably disappearing beneath the fingertips of its inhabitants. A yellow fog coats everything and begins to interrupt and disrupt meaning itself. Though the protagonist is fluent in the native tongue, language too is slipping away. She wanders the city in search of what she used to know—words, landmarks, old friends—capable only of finding a deeper and deeper sense of being lost.” —Vela

“Aesthetically precise and formally daring, Renee Gladman sets us adrift in the country of her imagination, challenging us to puzzle out fluency, space, and meaning along the way.” —Windham-Campbell Prize Committee