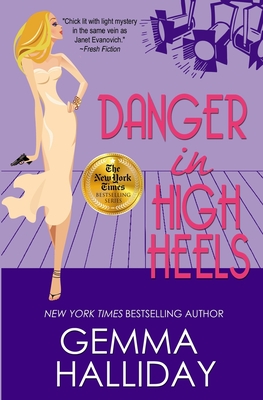 This is book number 7 in the High Heels Mysteries series.

#1 Amazon, New York Times & USA Today Bestselling series Death on the set of a Dancing with Celebrities TV show has someone taking their final bow... Maddie Springer is all about fashion. So when her the movie star her best friend is dating, Ricky Montgomery, becomes a contestant on the ballroom dance reality hit, Dancing with Celebrities, she is over the moon at the chance to view the sparkly, spandexy costumes up close. That is until Ricky's dance partner is found dead in his dressing room...in the nude Suddenly the police suspect him of murder, his girlfriend, Dana, suspects him of cheating on her, and the reporters at the L.A. Informer, Hollywood's most notorious tabloid, have dubbed him "Dancing Death." Now it's up to Maddie to clear his name as she wades through a misfit cast of reality show dancers to find out just who has a grudge against the show's star...and who is in danger of taking their final bow next Rating: This story does not contain any graphic violence, language, or sexual encounters. Its rating would be similar to PG-13 or what you would find on a Hallmark Channel movie or TV series. The High Heels Mysteries:
#1 Spying in High Heels
#2 Killer in High Heels
#3 Undercover in High Heels
#3.5 Christmas in High Heels (short story)
#4 Alibi in High Heels
#5 Mayhem in High Heels
#5.5 Honeymoon in High Heels (novella)
#5.75 Sweetheart in High Heels (short story)
#6 Fearless in High Heels
#7 Danger in High Heels
#8 Homicide in High Heels
#9 Deadly in High Heels
#10 Suspect in High Heels What critics are saying about the High Heels Mysteries: "A saucy combination of romance and suspense that is simply irresistible."
Chicago Tribune "Stylish... nonstop action...guaranteed to keep chick lit and mystery fans happy "
Publishers' Weekly, *starred review* "Ms. Halliday is the undisputed queen of the genre."
Fresh Fiction