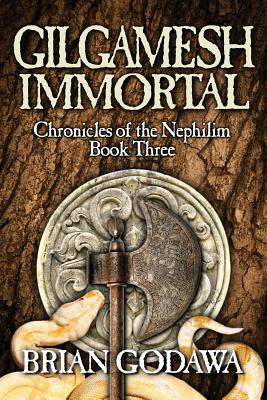 The Ancient Epic of Gilgamesh Brought to Life

In the ancient world after the Flood, the sons of Noah fill the earth. Wickedness reigns.

One giant warrior king named Gilgamesh sets out on an epic journey to seek eternal life in a land filled with death.

Accompanied by his only friend, the wild-man Enkidu, his quest takes them from a giant's forest, to the mountain of the gods, to the Path of the Sun in the Underworld...

And ultimately to a distant magical island to find the one man granted divine favor during the Deluge: Noah.

Gilgamesh Immortal is the third book of the Biblical Fiction Series Chronicles of the Nephilim, a biblical epic story of the fallen angelic Watchers and their offspring, the Nephilim giants of Genesis 6.

If you like the Biblical story of Noah, you'll find Gilgamesh Immortal an eye-opening sequel that ties in ancient history with the Bible like you've never read before

Learn About the Historical and Biblical Research Behind the Novel

Author Godawa shares the scholarly research that undergirds the ancient fictional action adventure. An appendix compares the Epic of Gilgamesh with the Bible.

On The Age Appropriateness Of The Novels

This Biblical Fiction series is rated PG-13, appropriate for mature teens and above, similar to the Bible and The Lord of the Rings.