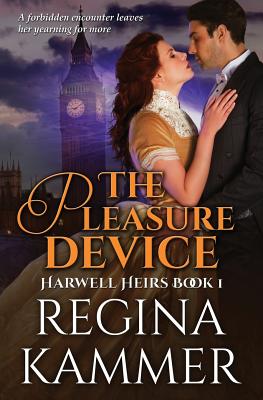 A forbidden encounter leaves her yearning for more...

In Victorian London of 1879, a new device for the treatment of hysteria has just arrived from France. Dr. Julius Christopher plans to use the invention for his own salacious scheme. Can Dr. Nicholas Ramsay prevent his beloved, the virginal debutante Helena Phillips, from being the next patient?

The Doctor and The Debutante
Nicholas Ramsay, renouncing his aristocratic heritage and dark past, has chosen a career as a doctor. He arrives in London ready to embark upon his practice and find a suitable wife.
Helena Phillips, born into scandal and disgrace, is making her London debut. To atone for the circumstances of her birth, she must find a titled husband-no less than an earl will do.

A Dangerous Passion
Nicholas and Helena's chance encounter during the Season leads to a dangerous attraction-and forbidden explorations. A taste of passion leaves Helena longing for more, and her lovesick wretchedness is confused for hysteria, a mysterious ailment afflicting many Victorian women.

A Devious Scheme
Dr. Julius Christopher's new electro-mechanical vibrating machine for the treatment of hysteria is the perfect device to test his radical theory of female sexuality. To fully explore his hypothesis, he requires a virgin and seeks to ensnare Helena for his experiment.

Can He Save Her?
Nicholas is determined to rescue Helena from the clutches of Dr. Christopher. But to prove he is worthy of Helena's hand, Nicholas must reconcile with his past, embrace his future, and show her pleasure is more profound when coupled with love.

Book 1: The Pleasure Device
In Victorian London of 1879, a new device for the treatment of hysteria has just arrived from France. Dr. Julius Christopher plans to use the invention for his own salacious scheme. Can Dr. Nicholas Ramsay prevent his beloved, the innocent debutante Helena Phillips, from being the next patient?

Book 2: Disobedience By Design
In 1860, the railways of Victorian England transport American stevedore Joseph Phillips to the lush countryside of Lincolnshire...and into the arms of Lady Sophia Harwell. But Sophia is betrothed to a violent villain who wants only two things: her innocence and her dowry. Can Joseph save his beloved without scandalizing upper-class British society?

Book 3: Where Destiny Plays
A night of passion at Victorian England's most notorious masquerade finds Arthur Harwell in the arms of Lavinia. A wealthy viscountess with strong political ties, she's the perfect match for the future marquess. But tragedy has left her unable to provide Arthur with the one thing he needs: an heir. Must Arthur abandon true love to satisfy aristocratic obligations?

Regina Kammer is a librarian, an art historian, and an award-nominated, best-selling, multi-published writer of erotica and historical erotic romance. Her short stories and novels make history sexier, whether the era is Roman, Byzantine, Viking, American Revolution, or Victorian. She's even sexed up contemporary settings, Steampunk, and Greco-Roman mythology. She has been published by Cleis Press, Go Deeper Press, Ellora's Cave, House of Erotica, Story Ink, The Naughty Literati, and her own imprint, Viridium Press. She began writing historical fiction with romantic elements during National Novel Writing Month 2006, switching to erotica when all her characters suddenly demanded to have sex. Keep up with Regina at: http: //kammerotica.com/