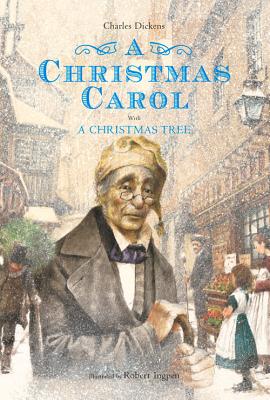 The complete and unabridged text enhanced with more than 70 illustrations by Robert Ingpen Includes an additional story by Charles Dickens, "A Christmas Tree"

The perfect gift for children and adults alike, Charles Dickens’ tale of self-discovery has become one of his most famous and best loved works. On Christmas Eve the miserly Ebenezer Scrooge is haunted by the ghost of his former business partner Jacob Marley, who warns him that he will be visited by three spirits. During the night, the ghosts of Christmas Past, Christmas Present, and Christmas Yet to Come show Scrooge the scenes of his youth, the poverty-stricken Christmas currently being endured by his loyal clerk Bob Cratchitt and his crippled son Tiny Tim—and the lonely future that awaits him if he continues in his grasping ways. He awakes on Christmas morning chastened by his nocturnal experiences, and resolves to be a better man. This volume also includes Dickens’ short story, "A Christmas Tree," with its evocative description of the delights of the season. With stunning, atmospheric new illustrations that evoke Dickensian London at Christmas time, award-winning artist Robert Ingpen has worked his wonders on this timeless tale.

Charles Dickens was a phenomenon by any standard. From a bitter and poverty-stricken childhood to a career as the greatest writer of his age, he led a life as full of incident as any of those he created in his novels. He is much loved for his great contribution to classical English literature, which includes 15 major novels and countless short stories and articles. Robert Ingpen has designed, illustrated, and written more than 100 published works of fiction and nonfiction, among them The Jungle Book and the centenary edition of Peter Pan and Wendy. In 1986 he was awarded the Hans Christian Andersen Medal for his contribution to children's literature.