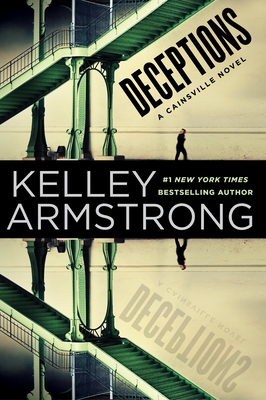 By Kelley Armstrong
Email or call for price.
Special Order

This is book number 3 in the The Cainsville Series series.

The #1 New York Times bestselling author of the Otherworld series delivers her most suspenseful novel yet, where the discovery of Cainsville’s dark past and the true nature of its inhabitants leads to murder, redemption, love, and unspeakable loss.

Olivia Taylor Jones’s life has exploded. She’s discovered she is not only adopted, but her real parents are convicted serial killers. Fleeing the media frenzy, she took refuge in the oddly secluded town of Cainsville. She has since solved the town’s mysteries and finds herself not only the target of its secretive elders but also her stalker ex-fiancé.

Visions continue to haunt her: particularly a little blond girl in a green sundress who insists she has an important message for Olivia, one that may help her balance the light and darkness within herself. Death stalks both Olivia and the two men most important to her, as she desperately searches to understand whether ancient scripts are dictating the triangle that connects them. Will darkness prevail, or does Olivia have the power to prevent a tragic fate?

KELLY ARMSTRONG is the #1 New York Times bestselling author of the Otherworld series, the Cainsville series, and the Nadia Stafford series, as well as the young adult trilogies Darkest Powers and Darkness Rising. She lives in rural Ontario, Canada.

“With each new series entry (Omens; Visions), Armstrong’s characterizations grow richer… the elements of magic are an undercurrent to emotional entanglements rather than taking center stage.” —Library Journal

“Fast-paced and engaging story...Those already hooked on the weird doings in Cainsville will have no reason to be disappointed here.” —Booklist

Praise for the Cainsville series:

“Fast-paced and mysterious.” –USA Today ‘Happy Ever After’ on Visions

“[The] chilling ending leaves just enough unresolved to hook readers for the next installment.”—Publishers Weekly on Visions

“One of the best new series debuts this year!  With its compelling characters and completely original set up, OMENS delivers a powerful combination of suspenseful thrills and supernatural chills.  I can't wait to read more!”
—Lisa Gardner, New York Times bestselling author of Touch & Go

“Like the creepy, spooky town of Cainsville, Kelley Armstrong's OMENS lured me in. I was too busy, way too busy for this book, which, through a series of surprises and sleights of hand, had me conspiring for ways to get back to the gripping story, the colorfully bizarre cast of characters, and the clever, strong, smart heroine at its center. Don't pick this book up if you have anything else to do. It will grab you by the collar and won't let you up for air until it's good and ready. And once you’re done, you won't soon forget it.”
—Lisa Unger, New York Times bestselling author of In the Blood

“Urban fantasy powerhouse Armstrong (the Otherworld series) begins the Cainsville series with a gripping thriller-paced novel featuring a young woman who learns that her wealthy parents adopted her after her biological parents were convicted of being serial killers. Mind control, gunplay, and double crosses will keep readers on edge to the last page.”
—Publishers Weekly on Omens

“Cainsville might be a nice place to visit, but I'm too creeped out to live there. Luckily, Armstrong isn't, and her dispatches from this village filled with sinister secrets are going to be keeping her readers up well into the night.”
—Linwood Barclay, #1 international bestselling author