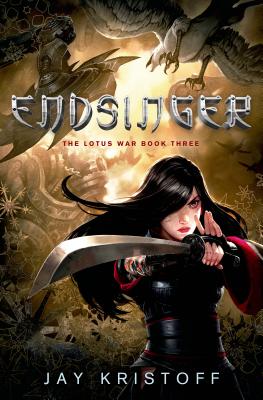 This is book number 3 in the The Lotus War series.

With Stormdancer, Jay Kristoff came roaring onto the fantasy scene—he has been praised as "the master of unique and intense plots and huge twists" (USAToday.com), while critics raved about the novel, calling it "[A] fast-paced, fantastical adventure [that] is sharp as a Shogun's sword." (The LA Times). And with healthy sales in hardcover and electronic—fueled by Jay's inventive, enthusiastic, and relentless promotion on his website, Facebook, Twitter, and the blogosphere—we know readers are hungry for the finale to his wildly inventive Lotus War saga.

As civil war sweeps across the Shima Imperium, the Lotus Guild unleashes their deadliest creation—a mechanical goliath, intended to unite the shattered Empire under a yoke of fear. Yukiko and Buruu are forced to take leadership of the rebellion, gathering new allies and old friends. But the ghosts of Buruu's past stand between them and the army they need, and Kin's betrayal has destroyed all trust among their allies. When a new foe joins the war, it will be all the pair can do to muster the strength to fight, let alone win. And as the earth splits asunder, as armies destroy each other for rule over an empire of lifeless ash and the final secret about blood lotus is revealed, the people of Shima will learn one last, horrifying truth. An exciting, vivid conclusion to a critically acclaimed series, Endsinger is sure to have fans racing through the pages to savor every last revelation.

JAY KRISTOFF is the New York Times and internationally bestselling author of The Lotus War, The Illuminae Files and The Nevernight Chronicle. He is the winner of four Aurealis Awards, an ABIA, a nominee for the Locus award, a nominee for the David Gemmell Morningstar and Legend awards, named multiple times in the Kirkus and Amazon Best Teen Books list and published in over thirty countries, most of which he has never visited. He is as surprised about all of this as you are. He is 6’7 and has approximately 12,015 days to live. He abides in Melbourne with his secret agent kung-fu assassin wife, and the world’s laziest Jack Russell. He does not believe in happy endings.