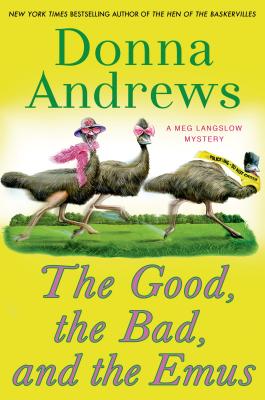 This is book number 17 in the Meg Langslow Mysteries series.

Life will never be the same for Meg Langslow after family secrets are revealed, introducing a whole new layer of intrigue in Donna Andrews's beloved series.

Meg's long-lost paternal grandfather, Dr. Blake, has hired Stanley Denton to find her grandmother Cordelia. Dr. Blake was reunited with his family when he saw Meg's picture—she's a dead ringer for Cordelia—and now Stanley has found a trail to his long-lost love in a small town less than an hour's drive away. He convinces Meg to come with him to meet her, but unfortunately, the woman they meet is Cordelia's cousin—Cordelia died several years ago, and the cousin suspects she was murdered by her long-time neighbor.
Stanley and Meg agree to help track down the killer and get justice for Cordelia. Grandfather even has perfect cover--he will come to stage a rescue of the feral emus and ostriches (escaped from an abandoned farm) that infest this town. He dashes off to organize the rescue—which will, of course, involve most of Meg's family and friends in Caerphilly. But then, the evil neighbor is murdered, and not only Cordelia's cousin but also the entire contingent of emu-rescuers, who have had conflict with the neighbor, are suspects. Only Meg and the cousin—who seems to share a lot of telling traits with Meg—can find the real killer and clear the air in The Good, the Bad, and the Emus, the newest beverage-spittingly funny installment in this uproarious series from the one-and-only Donna Andrews.

“A long-running series that gets better all the time. A fine blend of academic satire, screwball comedy, and murder.” —Booklist