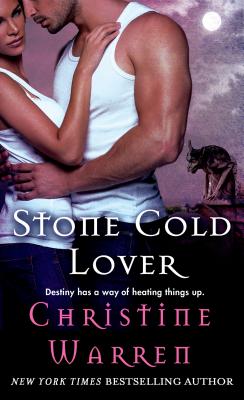 This is book number 2 in the Gargoyles Series series.

The second book in New York Times bestselling author Christine Warren’s breathtaking Gargoyle series. Sometimes the beast will only awake if he has an innocent woman to protect…

Art restorer Felicity “Fil” Shaltis can read the magic in auras, but her fascination with a valuable statue she’s asked to locate is magical in an entirely different way. Drawn to the stone beast in a way that mystifies even her, it’s all Fil can do to keep from being enraptured by the creature’s stone form. At least, until the fierce gargoyle statue comes to life as a powerful, and powerfully hot, immortal warrior …
Spar had no intention of waking unless one of the seven demons of the Dark pushed him to leave his isolation. But when a stunning, innocent woman finds herself marked by the demon, Spar is instantly drawn to her, will do anything to save her.
With a looming threat to humanity on the rise, Spar has no time to fall for the woman who’s pure beauty commands his soul. But even the most fearsome beast of all doesn’t get to choose who steals his heart…

“Soars with fun, witty characters and nonstop action.” ?Publishers Weekly on Stone Cold Lover
Don't miss the other books in the Gargoyle series:

“An awesome new series that paranormal fans will flock to.” —Night Owl Reviews (5 Stars) on Heart of Stone

“The opening of Warren's hot new paranormal series is a snarky, creative and steamy success that delights new and longtime fans alike.” —RT Book Reviews (4 stars) on Heart of Stone

“Steamy scenes, mixed with an intriguing story line and a hearty helping of snarky humor.” —Reader to Reader on Heart of Stone

“A Rousing first act that sets the boundaries of this engaging urban fantasy.” —Midwest Book Review on Heart of Stone

“Fast paced with caracters you'll love, and even some you'll love to hate, Heart of Stone is another winner for author Christine Warren!” —Romance Reviews Today