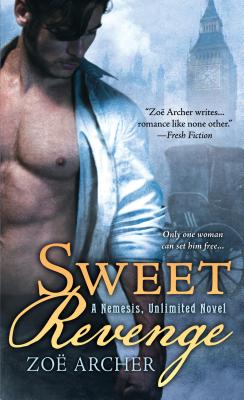 By Zoë Archer
Email or call for price.
Special Order

This is book number 1 in the Nemesis Unlimited series.

When Jack Dalton escapes from Dunmoor Prison, he has only one thing in mind—finding the nobleman who murdered his sister and making him pay. But when he reaches the inn where the Lord Rockley is rumored to be staying, three well-dressed strangers are there to meet him instead. And the pretty blonde is aiming a pistol right at his head …

Joining Nemesis, Unlimited has made Eva Warrick much more than the well-mannered lady she appears to be—one who can shoot, fight, and outsmart any man in the quest to right the injustices so often suffered by the innocent. She's not afraid of the burly escaped convict, but she is startled by their shared attraction. She and her partners need Jack's help to get to Rockley, but Eva finds she wants Jack for scandalous reasons all her own…

Zoë Archer is an award-winning romance author who thinks there's nothing sexier than a man in tall boots and a waistcoat. As a child, she never dreamed about being the rescued princess, but wanted to kick butt right beside the hero. A graduate of the Iowa Writers’ Workshop, she now applies her master's degrees in Literature and Fiction to creating butt-kicking heroines and heroes in tall boots. She is the author of the acclaimed BLADES OF THE ROSE series and the paranormal historical romance series, THE HELLRAISERS. She has also written steampunk romances, SKIES OF FIRE and SKIES OF STEEL. Zoë and her husband, fellow romance author Nico Rosso, live in Los Angeles.

“I will happily read anything that Zoe Archer writes. Her descriptive talent, insight into her characters and imagination are staggering, and in this new historic series, she is absolutely in her element. I was hooked from the first page of this story and utterly haunted when it was over. Without a doubt, this is a book to adore and a series to savor.” —The Romance Reviews

“Revenge can be sweet, smart, sexy and make for a fast-paced, non-stop read when Archer's the storyteller. Creating heroes to die for and empowered women and bringing them together in powerful action/adventures with depth of emotion and sensuality is her forte. To readers' pleasure, she brings an amazing cast of characters, a strong plot and romance to the first in her Nemesis, Unlimited series.” —Romantic Times on Sweet Revenge

“Sweet Revenge is an intense, fast-paced read. A strong plot, memorable characters, genuine emotions--not to mention plenty of heat. What more can a reader want?” —Sherry Thomas, author of Tempting the Bride

“The power, passion, suspense and romance sing throughout this tale of two very different people brought together by desire and their need to see justice done.” —Fresh Fiction

“Sweet Revenge is a sexy, action-packed romance with a to-die for hero and a true love that will make you swoon.” —New York Times bestselling author Courtney Milan

“A dark, riveting tale from beginning to end. Zoë Archer's books are not to be missed!” —USA Today bestselling author Alexandra Hawkins