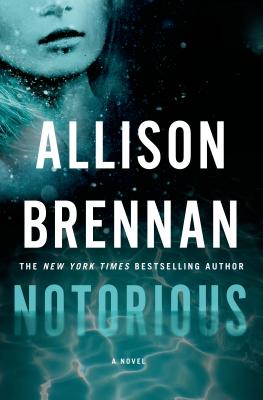 By Allison Brennan
Email or call for price.
Special Order

This is book number 1 in the Max Revere Novels series.

New York Times bestselling author Allison Brennan introduces an irrepressible heroine in her pulse-pounding new thriller Notorious, which Lisa Gardner says is, "Guaranteed to keep you up late at night."

Maxine Revere has dedicated her life to investigating murders that the police have long since given up any hope of solving. A nationally renowned investigative reporter with her own TV show and a tough-as-nails reputation, Max tackles cold cases from across the country and every walk of life. But the one unsolved murder that still haunts her is a case from her own past.

When Max was a high school senior, one of her best friends was strangled and another, Kevin O'Neal, accused of the crime. To the disgrace of her wealthy family, Max stood by her friend, until she found out he lied about his alibi. Though his guilt was never proven, their relationship crumbled from the strain of too many secrets.

Now Max is home for Kevin's funeral—after years of drug abuse, he committed suicide. She's finally prepared to come to terms with the loss of his friendship, but she's not prepared for Kevin's sister to stubbornly insist that he didn't kill himself. Or for an elderly couple to accost her at the airport, begging her to look into another murder at Max's old high school. Max is more interested in the cold case at her alma mater than in digging around Kevin's troubled life, but she agrees to do both. As Max uncovers dark secrets, she finds herself caught in a complicated web of lies that hit far too close to home. And it's becoming increasingly clear that someone will do whatever it takes to make sure the truth stays buried.

ALLISON BRENNAN is the New York Times and USA Today bestselling author of over thirty novels. Most recently, she was nominated for Best Paperback Original Thriller by the International Thriller Writers and is a two-time winner of the Daphne du Maurier Award by Kiss of Death. A former consultant in the California State Legislature, Allison lives in Northern California with her husband, five kids, and assorted pets.

“I've been a fan of Allison Brennan's novels from the beginning, but NOTORIOUS blew me away. Explosive suspense ratchets up with every turn of the page as murders--both past and present--twist into a story that demands to be read in one sitting. Here is a novel destined for bestsellerdom that will leave people clamoring for more stories of Max Revere. I know I will be!” —JAMES ROLLINS

“Fast-paced fun! Notorious packs in the thrills as investigative reporter Max confronts new murders and old family secrets in a suspense novel guaranteed to keep you up late at night!” —LISA GARDNER

“Brennan's NOTORIOUS introduces readers to a new and fascinating heroine worth rooting for. She's an investigative reporter who's not afraid to kick butt, climb a tree, or go to jail in pursuit of her story. She's savvy and smart and takes no prisoners. Buckle up and brace yourself for Maxine Revere.” —SANDRA BROWN