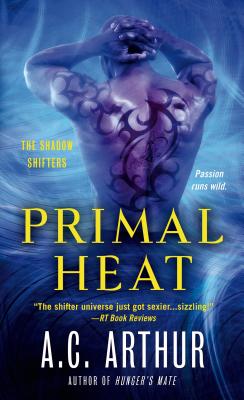 By A. C. Arthur
Email or call for price.
Special Order

This is book number 6 in the The Shadow Shifters series.

In the savage world of shapeshifters desire can be as dangerous as nature itself....

As bodyguard to the most powerful shapeshifter in the human world, Shadow Shifter, Eli Preston has sworn to protect his leader, defend their alliance, and keep his darker instincts in check. But when a beautiful female trainee arouses his jaguar senses, there is no stopping the beast within. He must have her. Even if it jeopardizes the deadliest mission of his life...

When the heat is on-and the claws come out-the heart is the fiercest hunter...

For six years, Nivea has been waiting for Eli to take her in his arms, unleash his animal urges, and claim her as his mate. But once their passion is unleashed-in a reckless moment of pure unbridled lust-nothing can ever be the same. The battlelines are drawn: man versus animal, shapeshifter versus shapeshifter. And Eli must be prepared to fight for his life-and his love-or he will lose Nivea forever...in Primal Heat, the final Shadow Shifters novel by A.C. Arthur.

A.C. Arthur was born and raised in Baltimore, Maryland where she currently lives with her husband and three children. An active imagination and a love for reading encouraged her to begin writing in high school and she hasn’t stopped since. Her debut novel Object of His Desire was written when a picture of an Italian villa sparked the idea of an African-American/Italian hero. Determined to bring a new edge to romance, she continues to develop intriguing plots, sensual love scenes, racy characters, and fresh dialogue—thus keeping the readers on their toes!

“Deliciously edgy, sexy, and certainly not to be missed. A.C. Arthur knows how to deliver the heat.” —Lora Leigh, #1 New York Times bestselling author on A.C. ARTHUR and her Shadow Shifter novels

“Arthur does a great job of building up the sexual tension…I'll be looking for the next one in the series.” —Under the Covers on A.C. ARTHUR and her Shadow Shifter novels

“Romantic…exciting…fast-paced.” —Genre Go Round Reviews on A.C. ARTHUR and her Shadow Shifter novels

“[A.C. Arthur] will keep you entranced starting at page one. The attraction between the characters is immediate and intense…totally awesome! I can't wait for more!” —Night Owl Reviews on A.C. ARTHUR and her Shadow Shifter novels