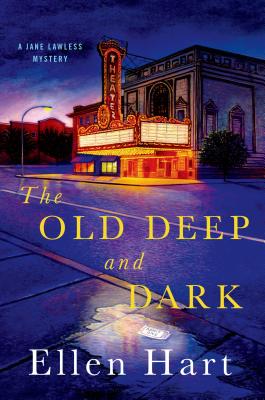 This is book number 22 in the Jane Lawless Mysteries series.

Renowned theater director Cordelia Thorn is working to restore a historic theater in downtown Minneapolis that she and her actress sister, Octavia, recently bought. Cordelia has a vision for the playhouse's future, but the more she learns about the building, the more fascinated she becomes by its past. Nicknamed "The Old Deep and Dark" because of the Prohibition-era double murder that occurred in the basement-then a speakeasy-there are a wealth of secrets hidden inside its walls. And, to her shock and horror, Cordelia discovers that there is also one present-day body literally buried in a basement wall. Cordelia immediately calls on her best friend, P.I. Jane Lawless.

Although Jane is already in the thick of another investigation-she's embroiled in a well-known country-western singer's family scandal-she agrees to help Cordelia out on the side. But show-biz is a small world, and as Jane starts tracing the trails of two separate investigations, she's surprised to find they might not be as unconnected as she thought.

With The Old Deep and Dark, the latest installment in the award-winning Jane Lawless series, Ellen Hart has crafted another impeccably plotted, seamlessly written mystery.

The Old Deep and Dark is the Winner of the Lambda Literary Award for Best Lesbian Mystery.

ELLEN HART, named the 2017 Mystery Writers of America’s Grandmaster, is the author of more than thirty mysteries. Entertainment Weekly has called her “a top novelist in the cultishly popular gay mystery genre.” She has won multiple Minnesota Book Awards, and has been nominated twenty-two times for the Lambda Literary Award, winning six. She lives in Minneapolis, Minnesota, with her partner of forty years.

"Does not disappoint: readers will be kept guessing and turning the pages until the very end." - GLBT Reviews, American Library Association

"Plausibly plotted and sufficiently suspenseful, with a cast that presents plenty of stage presence, this book enters from and exits stage right. If you’re searching for a novel mystery to read, The Old Deep and Dark fits the playbill. It’s an experience that will do your Hart good." - Curve

"Jane Lawless mystery fans will rejoice at a new installment with their favorite PI." - LGBT Weekly