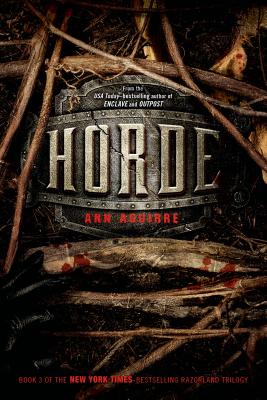 This is book number 3 in the The Razorland Trilogy series.

The horde is coming.

Salvation is surrounded, monsters at the gates, and this time, they're not going away. When Deuce, Fade, Stalker, and Tegan set out, the odds are against them. But the odds have been stacked against Deuce from the moment she was born. She might not be a Huntress anymore, but she doesn't run. With her knives in hand and her companions at her side, she will not falter, whether fighting for her life or Fade's love.

Ahead, the battle of a lifetime awaits. Freaks are everywhere, attacking settlements, setting up scouts, perimeters, and patrols. There hasn't been a war like this in centuries, and humans have forgotten how to stand and fight. Unless Deuce can lead them.

This time, however, more than the fate of a single enclave or outpost hangs in the balance. This time, Deuce carries the banner for the survival of all humanity.

ANN AGUIRRE is a New York Times & USA Today bestselling author and RITA winner with a degree in English literature. She lives in sunny Mexico with her husband, children, and various pets. She likes books, emo music, and action movies. She writes all kinds of genre fiction for adults and teens, including the Razorland series and Like Never and Always.

“[Enclave] is a young adult dystopian novel and has been compared to the hit series The Hunger Games. To say we're excited is a major understatement.” —ElleGirl.com

“In her first young adult novel, Aguirre has created a gritty and highly competent heroine, an equally deadly sidekick/love interest, and a fascinating if unpleasant civilization. This series is likely to hold considerable appeal for fans of The Hunger Games.” —Publishers Weekly

“Enclave is dark and thrilling, fast-paced and intense. With some graphic and gross imagery and a hard look at a post-apocalyptic world, Aguirre has taken themes from Scott Westerfeld and an assortment of zombie literature and created something that is very much her own--and a very engaging read.” —RT Book Reviews

“Aguirre's young adult debut is a gripping survival story set in an apocalyptic future. . . . This is a tense, action-packed dystopia with intriguingly gray characters.” —Booklist

“Deuce's passion for life, even in her bleakest moments, is contagious, and that passion exemplifies the nebulous force that has driven all of these individuals to persist in the face of awful options.” —The Bulletin of the Center for Children's Books