Kiss Me That Way: A Cottonbloom Novel (Mass Market) 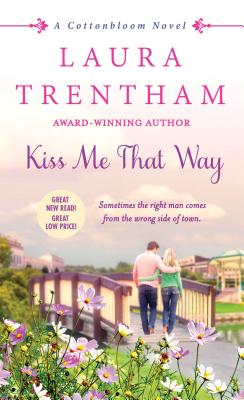 By Laura Trentham
$5.99
Email or call for price.

This is book number 1 in the Cottonbloom series.

A river divides Cottonbloom in two: the upscale enclave on the Mississippi side and the rundown, rough and tumble side in Louisiana. They’re worlds apart—but nothing can build a bridge like love…

Cade Fournette never had it easy Cottonbloom. He stuck around long enough to raise his orphaned siblings and then hightailed it out West—and never looked back. Even though he’s made a success of himself in Seattle, Cade never lost the toughness and the angry edge that helped him survive down South. His only weak spot: the girl he left behind…

Monroe Kirby came from the wealthy side of town, but that didn’t protect her from her mother’s drinking—or her mother’s boyfriend. It was Cade who did that, on a long-ago hot September night, before he disappeared…along with a piece of her heart. Now Monroe is a physical therapist who can fight for herself, and it’s Cade who could use some conditioning when he makes an unexpected return back home. Will he and Monroe pick up where they left off and finally explore their mutual passion—or will the scars and secrets of the past divide them once more?

An award-winning author, Laura Trentham was born and raised in a small town in Tennessee. Although she loved English and reading in high school, she was convinced an English degree equated to starvation. She chose the next most logical major—Chemical Engineering—and worked in a hard hat and steel toed boots for several years.

She writes sexy, small town contemporaries and smoking hot Regency historicals. The first two books of her Falcon Football series were named Top Picks by RT Book Reviews magazine. Then He Kissed Me, a Cottonbloom novel, was named as one of Amazon’s best romances of 2016. When not lost in a cozy Southern town or Regency England, she's shuttling kids to soccer, helping with homework, and avoiding the Mt. Everest-sized pile of laundry that is almost as big as the to-be-read pile of books on her nightstand.