Someone to Watch Over Me: A Thriller (Thora Gudmundsdottir #5) (Paperback) 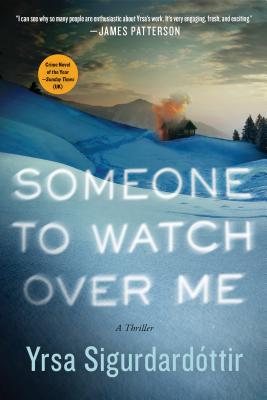 This is book number 5 in the Thora Gudmundsdottir series.

A young man with Down's Syndrome has been convicted of burning down his assisted living facility and killing five people, but a fellow inmate at his secure psychiatric unit has hired Thora to prove Jakob is innocent. If he didn't do it, who did? And how is the multiple murder connected to the death of a young woman, killed in what was supposed to be a hit-and-run?

“Iceland's Sigurdardottir is the reigning queen of mysteries, earning accolades worldwide and even an upcoming TV series. She deserves every bit of her praise. Her series about Reykjavik lawyer Thora Gudmundsdottir is one of the best out there: spunky but smart heroine, wonderfully exotic setting, great subplots about Iceland's financial collapse and intriguing mysteries that always manage to satisfyingly come together. Someone to Watch Over Me may be her best Thora book, seductively weaving together two seemingly disparate stories about a man with Down Syndrome accused of burning down his group home and the hit-and-run-death of a babysitter who now seems to be haunting her young charge.” —Cleveland Plain Dealer (Grade: A)

“Yrsa Sigurdardóttir is ensconced at or near the summit of Nordic crime writing.” —The Times (UK)

“Someone To Watch Over Me, just out, has already seen Yrsa Sigurdardóttir inevitably labeled 'Iceland's answer to Stieg Larsson'” —The Independent (UK)

“This is a dark and brilliant novel.” —Sunday Times (UK)

“Thriller of the week. This is a finely drawn portrait.” —Mail (UK)

“This is a tough but moving novel, with an unusual plot and characters.” —Sunday Times (UK)

“Nordic mystery writers can raise goosebumps as few others can, and Sigurdardottir shows she's one of the best.” —Booklist (starred) on I Remember You

“Sigurdardottir has written an excellent and seriously scary mystery with tangible and supernatural elements that will appeal to fans of John Ajvide Lindqvist.” —Library Journal (starred) on I Remember You