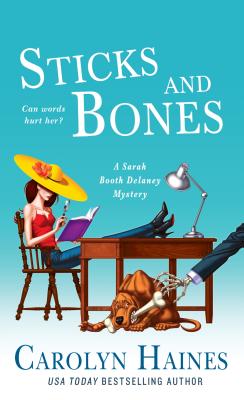 By Carolyn Haines
$7.99
Email or call for price.

This is book number 17 in the A Sarah Booth Delaney Mystery series.

Can Sarah Booth Delaney read between the lines and uncover the truth about this real-life murder mystery?

Private investigator Sarah Booth Delaney and her friends are celebrating New Year’s Eve at the party of the year, a smashing Winter Garden party at the Prince Albert Hotel. It’s a dazzling success…until Frangelica “Sister” McFee walks through the door. Sarah Booth knew Sister in college, before Sister became a bestselling author and moved to New York, and fame and fortune don’t seem to have tempered her arrogance and cruelty.

Sister’s latest book is a memoir about the death of her mother and brother many years ago. Now a film about the book is in the works, and a film crew has descended upon Zinnia, Mississippi, to tell the complete tale. When the film crew realizes there may be more to the story behind the scenes—and between the covers of Sister’s book—they hire Sarah Booth to find out what really happened all those years ago. But soon Sarah Booth realizes that someone is desperate to keep a long-buried secret…and will do whatever it takes to make sure no skeletons come out of the closet.

“A crazy cozy [series] with a little something for everyone…plenty of Evanovich zaniness, and a cast of eccentrics.”—Booklist

Carolyn Haines is the USA Today bestselling author of the Sarah Booth Delaney mystery series and a number of other books in mystery and crime, including the Pluto's Snitch paranormal-historical mystery series, and Trouble, the black cat detective romantic suspense books. She is the recipient of the Harper Lee Award for Distinguished Writing, the Richard Wright Award for Literary Excellence, and the Mississippi Writers Guild Lifetime Achievement Award. She is a former journalist, bartender, photographer, farmhand, and college professor and lives on a farm where she works with rescue cats, dogs, and horses.