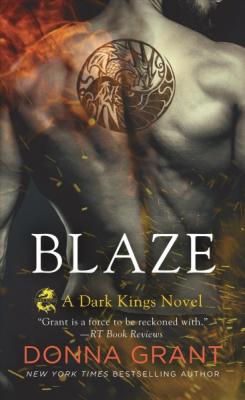 By Donna Grant
$7.99
Backordered or Out of Print

This is book number 11 in the Dark Kings series.

His strength, his masculinity brought out something primal within her. In his arms, she felt like the Amazon warrior she’d once pretended to be as a little girl.

Anson is a fierce Dragon King, a dragon shapeshifter born and bred to protect his own. But when a rogue tech company hacks into their world, he must join forces with the unlikeliest of allies: a human female. Her name is Devon Abrams. A rising star at the firm, she has no idea that her boss is in league with the sinister Fae and their secret war against humanity. If Anson gains her trust, he can defeat the enemy from within. But first he must fight his own attraction—to this exquisitely beautiful mortal…

Devon loves her job at the firm. But sometimes she wishes she could find a man—a real man—who isn’t threatened by her success. When she first meets Anson, she’s overwhelmed by his powerful masculine presence and disarmingly gorgeous smile. But when he reveals his true mission—and his ability to transform into a dragon—she’s irresistibly drawn into an epic battle between humans and immortals, magic and technology, danger and desire. Anson vows to protect her from the Fae. But can he control the flames of passion that blaze within his heart, in Blaze, the next sexy Dragon romance in the Dark Kings series from New York Times bestselling author Donna Grant.

New York Times and USA Today bestselling author Donna Grant has been praised for her “totally addictive” and “unique and sensual” stories. She’s written more than thirty novels spanning multiple genres of romance including the bestselling Dark King stories, Dark Craving, Night’s Awakening, and Dawn’s Desire. Her acclaimed series, Dark Warriors, feature a thrilling combination of Druids, primeval gods, and immortal Highlanders who are dark, dangerous, and irresistible. She lives with her two children, a dog, and four cats in Texas.

"Dark, sexy, magical. When I want to indulge in a sizzling fantasy adventure, I read Donna Grant."

"This series is a must read for paranormal / fantasy readers." - Night Owl Reviews Top Pick on Blaze

"Comes to life and grips you...a hard book to put down." - The Genre Mix on Blaze

"Grant's dragon-shifters can always be relied upon for steamy, intense romances and fierce battles." - RT Book Reviews on Passion Ignites

“Ms. Grant does not disappoint the recesses of the heart with Soul Scorched.” —Reader to Reader

“Donna Grant continues to build on the series... there is an attachment to the characters that you don't want to end.” —San Francisco Book Review on Soul Scorched