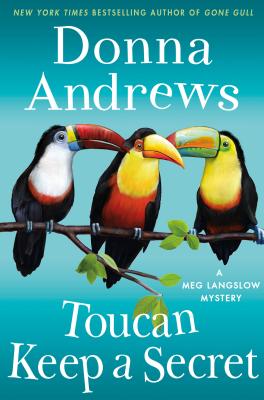 By Donna Andrews
$26.99
Backordered or Out of Print

This is book number 23 in the Meg Langslow Mysteries series.

Toucan keep a secret, if one of them is dead.

Meg Langslow is at Trinity Episcopal Church locking up after an event and checking on the toucan her friend Rev. Robyn Smith is fostering in her office. When she investigates the sound of hammering in the columbarium (the underground crypt where cremated remains are buried), Meg finds the murdered body of an elderly parishioner. Several niches have been chiseled open; several urns knocked out; and amid the spilled ashes is a gold ring with a huge red stone.

The curmudgeonly victim had become disgruntled with the church and ranted all over town about taking back his wife's ashes. Did someone who had it in for him follow him to the columbarium? Or was the motive grave robbery? Or did he see someone breaking in and investigate? Why was the ruby left behind?

While Chief Burke investigates the murder, Robyn recruits Meg to contact the families of the people whose ashes were disturbed. While doing so, Meg learns many secrets about Caerphilly's history—and finds that the toucan may play a role in unmasking the killer. Clues and events indicate that a thief broke into the church to steal the toucan the night of the murder, so Meg decides to set a trap for the would-be toucan thief—who might also be the killer.

"This long-running cozy series shows no signs of losing its freshness." —Publishers Weekly on Toucan Keep a Secret

"Fans will find all the beloved hallmarks of this award-winning series: fresh characters, an engaging puzzle, and delightful humor.” —Library Journal on Gone Gull

"With its well-spun plots and distinctive characters, Andrews’s amusing avian-named series shows no signs of growing stale." — Publishers Weekly on Die Like an Eagle

"As always, Andrews laces this entertaining whodunit with wit, a fine storyline and characters we've come to know and love." —Richmond Times-Dispatch on The Real Macaw

"With colorful characters, a solid mystery and laugh-out-loud moments . . . readers will have a rollicking good time." —RT Book Reviews (4 stars) on Swan for the Money

“With its well-spun plots and distinctive characters, Andrews’s amusing avian-named series shows no signs of growing stale.” —Publishers Weekly on Die Like an Eagle

“Few writers are as adept as Andrews at affectionately managing a large and varied cast of eccentric characters and concealing the murderer among them until the very end of the book.” —Denver Post on Six Geese A-Slaying