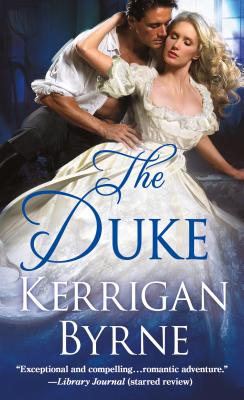 By Kerrigan Byrne
$7.99
Backordered or Out of Print

This is book number 4 in the Victorian Rebels series.

"This [is a] page-turning novel full of historical details and sensuous romance."--Publishers Weekly (starred review)

Strong as a Viking. Handsome as Adonis. Rich as Midas. Collin "Cole" Talmage, Duke of Trewyth, is the stuff that legends are made of. He's the English Empire's golden son--until fate has its way with him. Cole's family is killed and his closest comrade betrays him on the battlefield, leaving him gravely injured. But Cole is not one to dwell on misfortune. He is a man of duty, honor--and desire. And now he's ready for the fight of his lifetime...

Imogen Pritchard is a beautiful lass who works in a hospital by day and as a serving maid at night. Years ago, when she was young and penniless, she ended up spending a scandalous night with Cole, whose tormented soul was matched only by his earth-shattering passion. Imogen entered a marriage of convenience—one that left her a wealthy widow—but she never forgot Cole. Now that her long-lost lover has turned up in her hospital, injured and with no memory of her, Imogen is torn: Is it a blessing or a curse that their past remains a secret to Cole, even as his new passion for her leaves him wanting to protect and possess her...at all costs, in The Duke, the next Victorian Rebels novel by Kerrigan Byrne.

"This sexy romp has it all—a mystery, a feminist heroine worth rooting for, and moments of heat so intense they might need a nurse." - Kirkus Starred Review on The Duke

"This [is a] page-turning novel full of historical details and sensuous romance." Publishers Weekly Starred Review on The Duke

"Another hit from the phenomenal Byrne." - Library Journal Starred Review on The Highlander

"A rich, emotional love story." - The Washington Post on The Highlander

Captured me from page one and never let go. Romantic, lush, and suspenseful. —Suzanne Enoch, New York Times bestselling author on The Highwayman

A passionate, lyrical romance that takes your breath away. From the first page, you'll fall in love. —Elizabeth Boyle, New York Times Bestseller

The dark, violent side of the Victorian era blazes to life as a caring, competent heroine living under the radar is abducted by a notorious crime lord with wonderfully gratifying results in this exceptional and compelling vengeance-driven romantic adventure. —Starred Library Journal Review on The Highwayman

The romance is raw, edgy and explosive...the path they take through adversity makes the triumph of love deeply satisfying. —Publishers Weekly on The Highwayman

A truly mesmerizing series that highlights dangerous heroes who flout the law and the women who love them. —Library Journal Starred Review on The Hunter