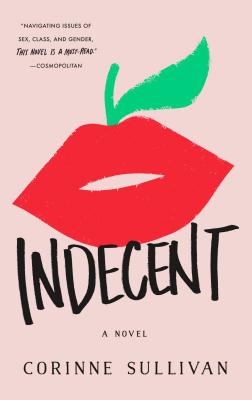 "[A] surprising debut...an affecting novel, examining self-doubt, self-sabotage, and the lasting impact of both." -- Publisher's Weekly

"Sullivan's debut is a smart and delicious page-turner." -- Booklist

Exploring issues of class, sex, and gender, Indecent by Corinne Sullivan is a smart, sexy debut that shatters the black-and-white nature of victimhood, taking a close look at blame and moral ambiguity.

Shy, introverted Imogene Abney has always been fascinated by the elite world of prep schools, having secretly longed to attend one since she was a girl in Buffalo, New York. So, shortly after her college graduation, when she’s offered a teaching position at the Vandenberg School for Boys, an all-boys prep school in Westchester, New York, she immediately accepts, despite having little teaching experience—and very little experience with boys.

When Imogene meets handsome, popular Adam Kipling a few weeks into her tenure there, a student who exudes charm and status and ease, she’s immediately drawn to him. Who is this boy who flirts with her without fear of being caught? Who is this boy who seems immune to consequences and worry; a boy for whom the world will always provide?

CORINNE SULLIVAN studied English with a Creative Writing Concentration at Boston College, where she graduated in 2014. She then received her MFA in fiction from Sarah Lawrence College in 2016. Her stories have appeared in Night Train, Knee-Jerk, and Pithead Chapel, among other publications. Indecent is her debut novel.

"Sullivan's debut is a smart and delicious page-turner." -- Booklist

"[A] steamy debut, in which infatuation crosses the line into obsession... Imogene's backstory...will have readers sympathizing with her as she works through her past." -- Library Journal

"[A] surprising debut...an affecting novel, examining self-doubt, self-sabotage, and the lasting impact of both." -- Publisher's Weekly

"The disturbingly painful depiction of the struggle to be at home within one's skin will move teens with its well-written, haunting, and illuminating story of a young woman spinning out of control." -- School Library Journal

"Red, white, and womp womp. Indecent by Corinne Sullivan is about a female teacher's affair with a student at a boarding school. Spoiler: it's f'ed up." -- theSkimm

"A unique and sexy coming-of-age story that turns the prep school novel on its head, Indecent is the kind of book you won't be able to stop thinking about." -- Bustle

"Navigating issues of sex, class, and gender, this novel is a must read." -- Cosmopolitan

"[An] unputdownable page-turner... Fans of Gossip Girl and Prep will take to Corinne Sullivan's debut that explores the nitty-gritty realities and pent-up sexual tension of private-school life." -- InStyle