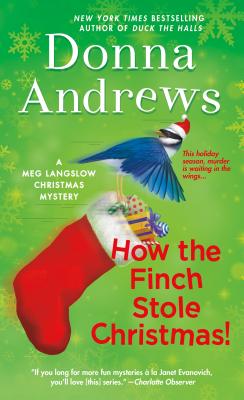 By Donna Andrews
Email or call for price.
Backordered

This is book number 22 in the Meg Langslow Mysteries series.

Where’s that partridge in its pear tree?


It’s Christmas time in Caerphilly, VA, and nothing is going by the book. Meg Langslow is trying to be supportive of her husband, who’s escalated his one-man show of Dickens’ A Christmas Carol into a full-scale production that includes their sons as Tiny Tim and the young Scrooge. But when the real Scrooge comes to town—a famous actor who is known for his personal dramas off-stage—Meg finds that her role as stage manager is a lot more than she bargained for. When Scrooge’s inner demons and actual enemies catch up with him, it’s up to Meg to solve a holiday murder mystery before the curtain comes down. . .and the killer takes flight.

“Andrews manages her large cast with dexterity and drops clues to the culprits’ identity, but the ending will catch most readers by surprise.” —Publishers Weekly