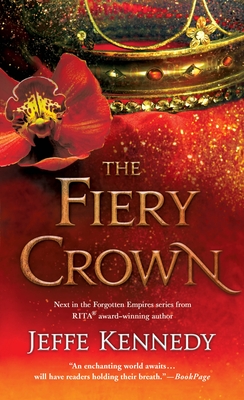 By Jeffe Kennedy
$7.99
Backordered or Out of Print

This is book number 2 in the Forgotten Empires series.

A desperate alliance. A struggle for survival. And a marriage of convenience with an epic twist of fate come together in Jeffe Kennedy's The Fiery Crown. Perfect for fans of Sarah J. Maas, the lush romantic fantasy world of the Forgotten Empires series will sweep you away.

WILL THEIR LOVE STAND THE TEST OF TIME

Queen Euthalia has reigned over her island kingdom of Calanthe with determination, grace, and her magical, undying orchid ring. After she defied an empire to wed Conrí, the former Crown Prince of Oriel—a man of disgraced origins with vengeance in his heart—Lia expected the wizard’s prophecy to come true: Claim the hand that wears the ring and the empire falls. But Lia’s dangerous bid to save her realm doesn’t lead to immediate victory. Instead, destiny hurls her and Conrí towards a future neither could predict…

OR TEAR THEIR WHOLE WORLD APART?

Con has never healed after the death of his family and destruction of his kingdom—he’s been carefully plotting his revenge against his greatest enemy, Emperor Anure, waiting for the perfect opportunity to strike. When Lia’s spies gather intelligence suggesting that Anure is planning an attack against Calanthe, Con faces an agonizing choice: Can he sacrifice Lia and all she holds dear to destroy the empire? Or does his true loyalty exist in the arms of his beguiling, passionate wife—’til death do they part?

The Forgotten Empire series is:

"Kennedy’s world building is attentive and luxurious in this middle volume of a trilogy ... Readers looking for a well-balanced blend of romance and fantasy with a gradually building relationship and ever-increasing stakes should give the series a try." - Booklist

"Kennedy's second in the 'Forgotten Empires' trilogy...does an excellent job of setting the stage for the conclusion. ...readers will be fascinated by the secrets revealed." - Library Journal

"A thrilling tale of two strong-willed souls discovering what is truly important to them." - Romance Junkies

Praise for The Orchid Throne

"An enchanting world awaits in The Orchid Throne...With detailed world building and an intriguing cast of characters—especially a warrior woman and an enigmatic and amusing wizard—this captivating story will have readers holding their breath." - BookPage

"An exciting start to a new series." - All About Romance

"I highly recommend this for lovers of fantasy romance who like intricate but not overly complicated worldbuilding, strong characters, and exciting action packed scenes to go along with a sexy love story." - Harlequin Junkie (Top Pick)

"An immediately absorbing and original novel by an author with a distinctive and thoroughly reader engaging narrative storytelling style, "The Orchid Throne" by Jeffe Kennedy will become an immediate and enduringly popular addition to community library Fantasy Fiction collections." - Midwest Book Review

"The Orchid Throne was a moving tale of choices, fate, and loss ... Beautifully written and such a moving love story." - The Nerd Daily

"A captivating read that grows more engrossing with each chapter." - Romance Reviews Today

"This book is smart, sexy - smoldering, really - and so good!" - Read a Romance Month