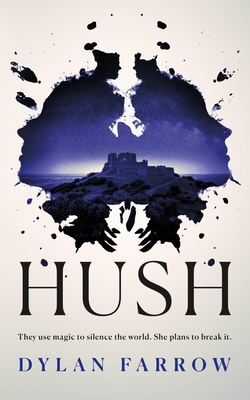 This is book number 1 in the The Hush Series series.

“Dylan Farrow shows potential to be the next big name in YA fantasy with her stunning debut, Hush, about a world full of secrets and the girl willing to speak them all. With a deeply layered magic system reminiscent of Alison Croggan’s Pellinor series and fierce characters on par with Tamora Pierce’s Tortall, Farrow blends classic high fantasy with a strong feminist message of self-belief and courage. You don’t want to miss this one.”
— Sami Thomason, Square Books, Oxford, MS

Graceling meets Fable in this exciting debut novel by an electrifying new voice — now in paperback!

They use magic to silence the world. Who will break the hush?

Seventeen-year-old Shae has led a seemingly quiet life, joking with her best friend Fiona, and chatting with Mads, the neighborhood boy who always knows how to make her smile. All while secretly keeping her fears at bay… Of the disease that took her brother’s life. Of how her dreams seem to bleed into reality around her. Of a group of justice seekers called the Bards who claim to use the magic of Telling to keep her community safe.

When her mother is murdered, she can no longer pretend.

Not knowing who to trust, Shae journeys to unlock the truth, instead finding a new enemy keen to destroy her, a brooding boy with dark secrets, and an untold power she never thought possible.

"A captivating YA fantasy that kept me guessing all the way through... Highly recommend for fans of Tricia Levenseller, Cassandra Clare, and Amanda Hocking." - Young Adult Books Central

"In this cruel, beautiful realm, all reading and writing as well as select spoken words are strictly forbidden to the lower classes, while the elite of Montane, called Bards, are skilled in the powerful magic of Telling — a form of reality-altering sorcery based in the use of language... The novel speaks brilliantly to the many ills of 2020." - Entertainment Weekly

"[A] notable debut... The themes of quarantine and deadly disease in the context of current events are poignant; Farrow deftly demonstrates the power of language and education in the hands of the elite as a means for controlling others through propaganda. An intriguing female-driven dystopian fantasy for the same audience who loved the “Hunger Games” series." - School Library Journal

"Hush is a captivating tale of a girl's fight for her voice in a world where the only thing deadlier than power is the truth. Shae's search for answers in the dark will stay with readers long after the last page." - Margaret Owen, author of The Merciful Crow

"Farrow carefully crafts a layered world hiding dark secrets and gives us a fierce protagonist determined to unearth the truth-no matter the consequences. A compelling tale that's bound to grab your heart." - Swati Teerdhala, author of the Tiger at Midnight series